Business registration in Cambodia far speedier thanks to internet 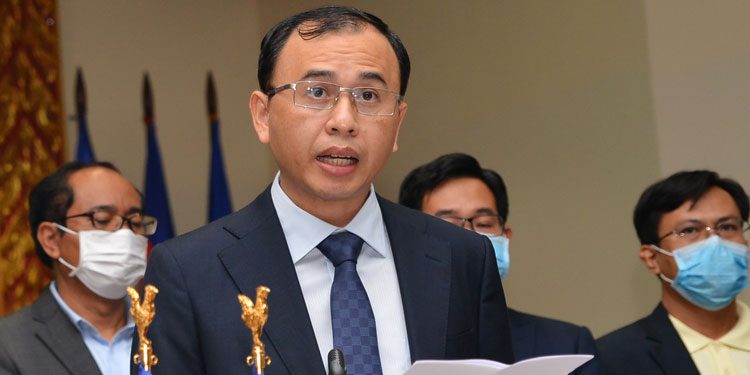 More than 1,360 applications have been approved via the online business registration as of Oct 2 after the government launched it on June 15.

“Within almost a four-month period as of October 2, 2020, we received a total of 1,793 applications, 1,367 of which have been approved and 426 of which are under review. The average number of days it takes to register a company is eight,” said Undersecretary of State of the Ministry of Economy and Finance and Chairman of Techo Startup Centre (TSC) Kong Marry.

Marry said: “In terms of the size of the investment, the total is 2 trillion KHR – $500 million. China, Singapore and the United Kingdom have the biggest investments with 33.5 percent, 25.6 percent and 25.3 percent, respectively.”

He added positive feedback had been received from the private sector (investors and businesspeople) and the public. They said the new system is user-friendly and convenient given a business registration can be made as a package on the same platform with three different ministries/institutions (the Ministry of Commerce (MOC), the General Department of Taxation and the Ministry of Labour and Vocational Training) at the same time.

The previous procedure could take up to several months. The registration fee of each ministry/institution, including MOC registration, tax registration, patent tax and notice for opening an enterprise has been discounted about 40 percent compared with the previous fees.

He said that the launch of the system has resulted in monumental improvements; particularly in the much-reduced timeframe to register, elimination of certain physical attendance requirements such as picture-taking and fingerprinting at the General Department of Taxation for the chairman and the efficiency of ministries sharing documents, significantly eliminating duplicate processing and bureaucracy.

“With the synchronisation of the three ministries, Commerce, Tax, and Labour, the processing time is just two to three weeks with basically a single document submission, whereas previously the sequence of delivering the documents, adding new documents along the line to each ministry, once the other was completed, took up to two to as much as six months or more,” he added.

“Although the Online Business Registration System is a tremendous improvement and massive step forward, a few wrinkles remain,” Galliano said.

Unfortunately, the company name-check still takes up to three business days and each shareholder and director must sign the draft articles of association, which can significantly delay the processing if they are located outside the country and in different countries from each other, he added.

He said that a digital signature would solve this problem but added that physical presence for the account signatories for the bank confirmation letter is generally required, with some banks allowing remote video accounts to open because of travel restrictions, if overseas shareholders and directors wish to be account signatories.  Essentially, a registration agent is generally still required to coordinate and overcome these processing issues.

“The intent of the Online Business Registration System was to cover licensing and QIP (qualified investment project) approvals. This is still unavailable and, as I understand, remains far off.  Once licensing and QIP approvals are added, this would leapfrog the Kingdom ahead of most countries globally as one of the most efficient countries for ease of registration,” Galliano continued.

Marry, however,  said that government is still encountering some technical and non-technical challenges that require all relevant ministries and institutions to work very closely and continuously over procedures.

Marry added that things need to be done to be more comprehensive including the expansion of accessibility by adding more functions in the registration portal including a function to update company information after approval, allow IT systems of other ministries/institutions to link with the Cambodia Data Exchange (CamDX) platform for specialised licence-issuance for specific types of businesses, to disseminate information more widely via public and private media, social networking, workshops with various business associations and the translation of related documents and websites into other languages.

Currently, the first stage of the Online Business Registration System via the CamDX is only involved with the three ministries/institutions mentioned above, according to Marry.

‘I regret nothing’: Indonesian YouTube star Ria Ricis’ rise to the top