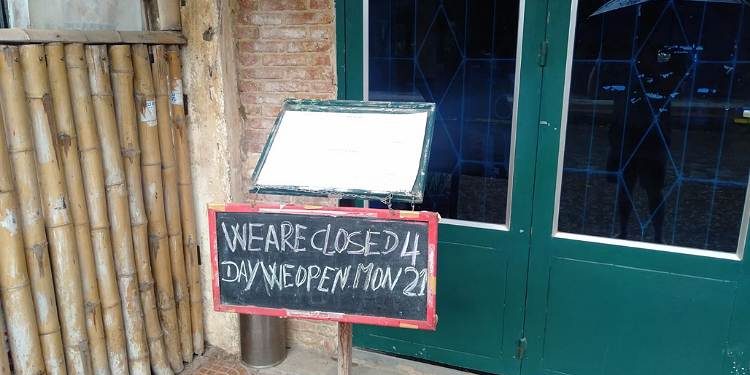 Business owners in Kampot have reported missing out on much needed revenue during Pchum Ben despite the influx of domestic tourism, with many forced to close their establishments or run at half capacity due to low worker availability over the holiday period.

In Kampot, popular online booking sites were reporting reservations nearing full capacity in the seaside town, which has become popular with both Phnom Penh locals and expats because of its accessibility from the capital.

However, many restaurants, bars and hotels in the town were closed or running at half capacity as they were unable to sufficiently staff their establishments as local workers also left for the holiday break.

Yesterday a local restaurant and bar owner in Kampot, who did not want to be named, said that efforts to attract customers had been successful, however, businesses now lacked the staff to properly cater to them.

“It has been hard trying to cater to the large numbers of customers with only half my staff rostered to work. However, from a financial standpoint, we had to open over the holidays as the income is vital for ensuring we can continue to survive during the COVID-19 pandemic,” the owner said

“That said, Pchbum Ben is a sacred period for many Cambodian’s and most of our customers have understood this,” he added.

Tony Giddings, owner of The Hideaway Guesthouse in Kampot, previously told Khmer Times that he, and other businesses in the area, are still trying to continue to attract tourists.

“We are bringing the prices of our bungalows down to $15 a night, right on the riverside. These holidays are a time for us to try and bring in as many people as possible.”

“Kampot is a beautiful riverside town with lots to do including exploring local waterfalls and trekking the Bokor Mountain and a lot of businesses in town run different entertainment nights such as live music and quiz nights. Now is the time for people around the country to support local businesses,” he added.

Cambodia’s tourism sector amid the pandemic has relied heavily on national holidays and domestic tourism, as businesses have been forced to shift their target market away from international tourists, especially in Siem Reap, Kampot, Sihanoukville and its surrounding islands.

According to a report by the Ministry of Tourism, more than 1.16 million domestic tourists holidayed in provinces across the Kingdom during the four-day Khmer New Year last month.