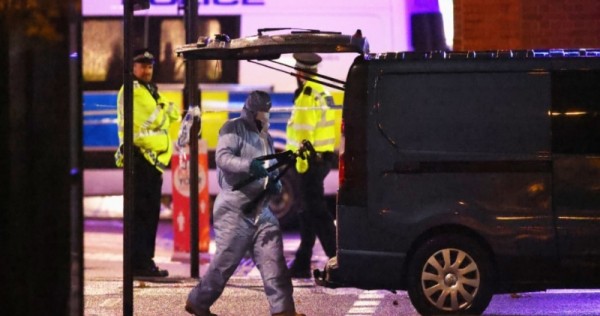 British police said they had detained a man who crashed a car into a north London police station on Wednesday.

There were no reports of any injuries.

The Metropolitan Police said the incident took place just before 7 p.m. at Edmonton Police station which was then evacuated. The police said an investigation was being led by a local team with the support of counter-terrorism officers.

The Guardian said the initial view was that the incident was not terrorism-related. There were no further details from police about the nature of the incident.

Ambulances and fire engines were sent to the scene and a police cordon was put in place.

Unverified footage on social media showed a car at the front of the station and a man appearing to start a fire on the street outside before being grappled onto the ground by officers.

“The cordon has been reduced and officers have returned to the station,” police said in a statement.

Sadiq Khan, mayor of London, said on Twitter: “I’m grateful to the police officers and other emergency services who brought the situation under control and continue to investigate the incident.”

I'm in constant contact with the @MetPoliceUK Commissioner about the major incident in Edmonton this evening.

I’m grateful to the police officers and other emergency services who brought the situation under control and continue to investigate the incident. https://t.co/IxZ9mlzJlr

Earlier this month, the terrorism threat level in Britain was raised to “severe”, meaning an attack was seen as highly likely, after incidents in France and Austria, although the government said there was no specific threat.

Thai police hunt for woman who abandoned newborn on road