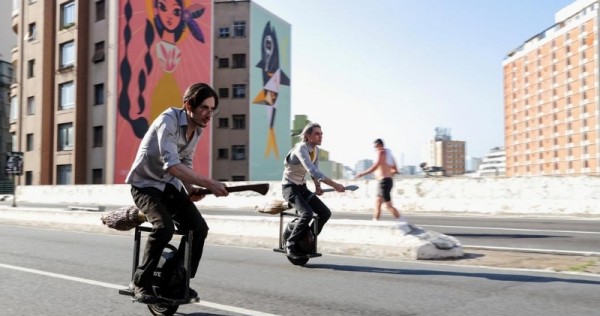 SAO PAULO – In the famously traffic-choked streets of Brazilian megalopolis Sao Paulo, two men have invented a novel way of getting from point A to B – and they are raising a lot of eyebrows in the process.

On a recent Saturday, Vinícius Sanctus, 39, and Alessandro Russo, 28, could be seen coasting down the city’s main thoroughfares on a pair of broomsticks, each one attached to a single motorized wheel.

In motion, the contraptions look uncannily like the brooms used by witches and wizards in the Harry Potter universe, described in the famed books by British author J.K. Rowling and later depicted in a series of hit films.

To steer, the duo simply lean in the direction they wish to travel. While it takes a bit of practice at first, the broomsticks, which can reach top speeds of 60 kilometres per hour (37 mph), are useful for day-to-day urban living, they say.

“Actually, I tell my friends that now I only go to the bakery using my broom. But it’s not a joke. I actually do that,” said Russo, whose waistcoat and golden tie would not be out of place at Hogwarts, the school of magic attended by Potter.

“I use my broom as a means of transportation nowadays. And it’s so fun.”

So far, the brooms for Muggles – non-magic people – are largely limited to personal use, but Russo and Sanctus have plans to market and sell the broomsticks, which cost about 4,000 reais (S$989) each.

Hopefully, they say, people will be able to play a game using the brooms that closely resembles Quidditch, the dominant sport in Rowling’s magical universe.

“Our final goal is to sell the brooms to the world and maybe create a new variation of Quidditch,” said Russo. “And it’ll look a lot like the one played in the Harry Potter movies.”