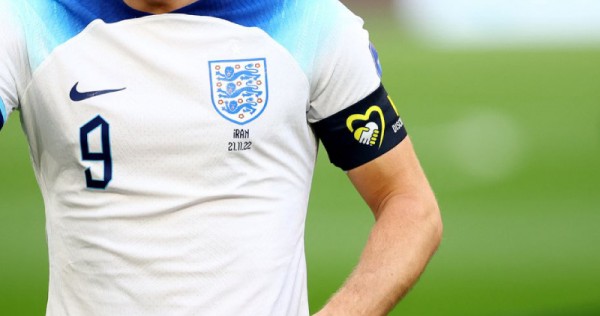 DOHA – Soccer federations who had planned to wear OneLove armbands to protest against discrimination during the World Cup in Qatar were faced with “extreme blackmail” that led to them dropping the gesture, the German Football Association (DFB) said on Tuesday (Nov 22).

The federations of England, Wales, Belgium, the Netherlands, Switzerland, Germany and Denmark had said on Monday they had been put under pressure by FIFA, who had threatened to issue yellow cards to any player wearing the multi-coloured armband.

Homosexuality is illegal in the Gulf state.

The DFB’s media director Steffen Simon told German Deutschlandfunk radio that England, who had been the first team to be expected to wear it on Monday in their game against Iran, had been threatened with multiple sporting sanctions.

“The tournament director went to the English team and talked about multiple rule violations and threatened with massive sporting sanctions without specifying what these would be,” he said.

Simon, who did not specify if he was referring to local organisers or FIFA in his reference to the tournament director, said the other six nations then decided to “show solidarity” and not wear it.

“We lost the armband and it is very painful but we are the same people as before with the same values. We are not impostors who claim they have values and then betray them,” he said.

“I can understand the disappointment. We had the choice between the plague and cholera,” Simon said.

The English team did not want to comment on this matter. FIFA and local organisers did not respond to Reuters requests for a comment.

The DFB’s U-turn drew criticism in Germany, with supermarket chain REWE dropping its deal with it.

Germany coach Hansi Flick said the team had wanted to make the statement but FIFA’s short-notice decision before the England game meant there was no time to coordinate with the other countries.

“The (German) team is very dissatisfied and shocked because it is a statement for human rights and diversity and these are values that we live,” Flick told a news conference.

“Getting yellow cards would have been alright. That would not have been a problem but the way it was left open and the threat of sanctions meant there was no time to react. It is the way it is but it is a shame.”

Germany midfielder Joshua Kimmich said while players had nothing to do with awarding the tournament to Qatar 12 years ago, he would still like to be able to enjoy the competition.

“I want to be able to be happy playing in a World Cup even if it is held here. We want to play a good tournament and win tomorrow and it is not our fault where the World Cup is held.”

The DFB told Reuters it was now checking all its options following FIFA’s decision.

While the European nations decided to drop the armbands, the national team of Iran declined to sing their anthem before their opening World Cup match on Monday in a sign of support for mass protests back home and a violent state crackdown on the unrest.

“We have a lot of respect for what the Iran team did yesterday. We feel with the Iranian women.”

“The DFB is in a fundamental opposition within FIFA,” he said.