Biden says he was expressing “moral outrage” at Putin, not articulating change in United States policy 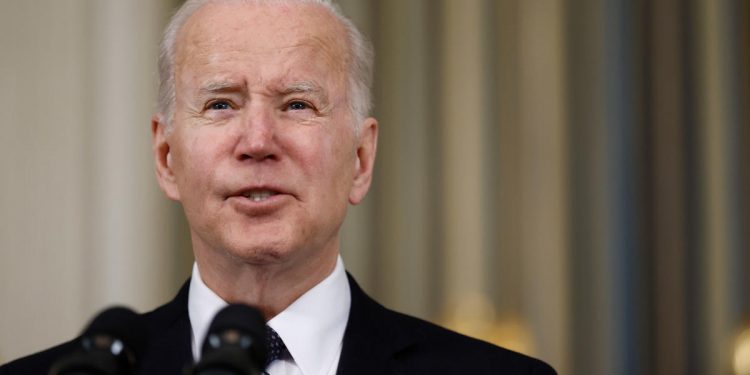 President Biden on Monday sought to clarify a remark he made Saturday in Poland that Russian President Vladimir Putin “cannot remain in power.” He said Monday that he was expressing his moral outrage at the “actions of this man” over his brutal invasion of Ukraine, not expressing a change in United States policy.

“I want to make it clear: I wasn’t then, nor am I now, articulating a policy change,” he told reporters at the White House during remarks to unveil his budget. “I was expressing the moral outrage that I feel, and I express no apologies for it — my personal feelings.”

The president denied that his original comment was complicating any diplomatic efforts around the conflict in Ukraine. “What complicates the situation at the moment,” he said, “are the escalatory efforts of Putin.”

Mr. Biden said he added the line about Putin Saturday because his words were meant for the Russian people, and he was telling the rest of the world that “this type of behavior is totally unacceptable.”

Soon after Mr. Biden had made his remarks Saturday, the White House tried to walk back his comment, with an official saying he wasn’t talking about regime change.

“The president’s point was that Putin cannot be allowed to exercise power over his neighbors or the region,” a White House official said. “He was not discussing Putin’s power in Russia, or regime change.”

On Monday, the president said he wasn’t “walking anything back” in explaining he was expressing “moral outrage” and not a policy change.

In a statement to The Associated Press, Kremlin spokesman Dmitry Peskov said, “It’s not up to the president of the U.S. and not up to the Americans to decide who will remain in power in Russia.”

“Only Russians, who vote for their president, can decide that,” Peskov added. “And of course it is unbecoming for the president of the U.S. to make such statements.”

On Monday, Mr. Biden said he doesn’t care what Putin thinks of his remarks.

“I don’t care what he thinks,” Mr. Biden said. “Look, here’s the deal — he’s gonna’ do what he’s gonna’ do.” He added, “People should understand that he is going to do what he thinks he should do — period. He’s not affected by what anybody else apparently, unfortunately, even his own advisers.”

Mr. Biden made the remark about the Russian president at the tail end of his speech at the Royal Castle in Warsaw. He also condemned Putin’s war in Ukraine, while sympathizing with the Ukrainian people who have had their homeland destroyed by Russian forces, as well as the Russian people who have been “cut off from the rest of the world.”

What is a no-fly zone, and why won’t the U.S. enforce one over Ukraine?