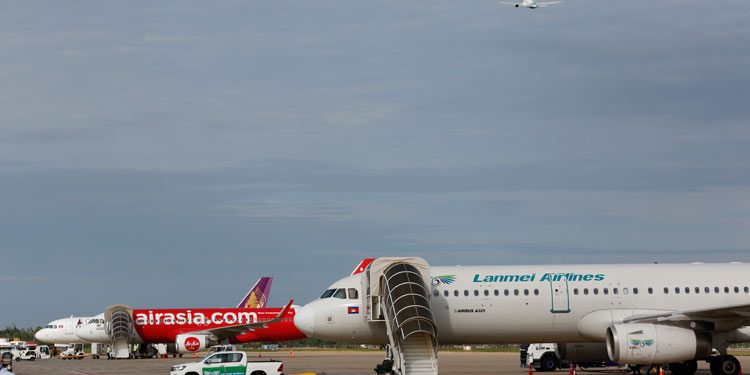 More regional airlines have begun to slowly reinstate flights to Cambodia’s international airports this month – under strict biosecurity guidelines – as the industry attempts to desperately revive itself from its worst period in aviation history.

Other major airlines such as, Qatar Airways, Cathay Pacific, Thai Airways and Emirates are also scheduling for flights to resume to Cambodia in June and July this year, coinciding with their main departure points also planning to reinstate international flight paths.

However, airlines that have decided to restart routes have also implemented strict biosecurity conditions during the flights to follow with reports of passengers having to undergo “on the spot” blood tests, as well as, wearing personal protection wear with staff seen dressed in full bio suits.

Khmer Times spoke with an Emirates representative because the carrier plans to resume flight in June has introduced on-site rapid finger prick tests for the virus at its Dubai Airport Terminal which can produce results in under 10 minute. In addition, the carrier requires passengers to wear their own masks when at the airport and on board the aircraft, and follow social distancing guidelines.

While these measurers may seem extreme the aviation businesses are desperate to get their currently grounded planes back into the sky and generating income as the pandemic has pushed many companies to breaking point.

As the International Air Transport Association (IATA) on Tuesday updated its analysis of the COVID-19 impact on revenue in the global air transport industry, and now estimates passenger revenues could plummet $252 billion – 44 percent below 2019 revenues.

Cambodia had continued to keep its international airports open throughout the crisis so far, with several vital flights being arranged this month to return stranded foreigners home.

Flights to China and several destinations are also continuing without stoppage while Siem Reap International airport and Sihanoukville International airport also remained opened throughout the pandemic without closure, although non-essential sectors of all three airports were closed, some outlets were also shut.

The policy has been in sync with statements from the World Health Organization advising against “the application of travel and trade restrictions to countries experiencing COVID-19 outbreaks”. It claimed that travel bans are “usually not effective in preventing the importation of cases”. The United States, Russia, Japan, India, Australia, Israel, Saudi Arabia, Democratic People’s Republic of Korea and Republic of Korea are among countries that have imposed restrictions on travel to and from other countries.