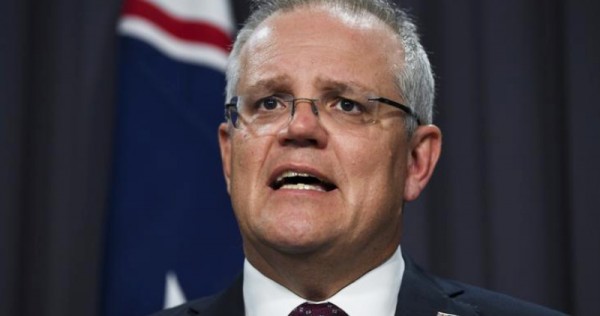 Australian Prime Minister Scott Morrison has signalled Australia would move in lockstep with its allies to sanction China if it has provided military support to Russia in its war with Ukraine.

Morrison also criticised China’s move to import Russian wheat while maintaining a “chilling silence” on the crisis, adding that China needed to make clear its dealings with Russia.

“I think it’s very important for China to be very transparent about what is their relationship with Russia when it comes to throwing them an economic lifeline during this global crisis,” Morrison said during a press conference on Wednesday (March 16)

“And potentially what, if any, support has been discussed for military support for Russia? Because that would be an abomination.”

Morrison said he would support statements made by other allies and partners such as the United States on the matter. A day earlier, Washington said Russia had asked China for military equipment to support its invasion of Ukraine.

This follows the prime minister’s call last week for China to denounce Moscow’s invasion of Ukraine.

Meanwhile, Russia has said it was counting on China to weather the economic sanctions imposed by Western nations.

Earlier this week, Chinese Foreign Minister Wang Yi clarified during a phone conversation with Spanish Foreign Minister José Manuel Albares Bueno that Beijing had been vocal about promoting peace in its own way since the Ukraine crisis but maintained that it was not a direct party in the crisis.

Yi rejected efforts by “some forces” to smear Beijing’s position on the Ukraine issue and fabricate false information.

“China has the right to safeguard its legitimate and lawful rights and interests. Spain is a power of stability in Europe and we believe it can play a positive role in peacefully resolving the crisis,” he said pointing out the Ukraine crisis had been the culmination of tensions in Europe over many years.

Tensions have been simmering between the two countries and major trading partners since Canberra called for an independent inquiry into the origins of the coronavirus without consulting Beijing in April 2020.

The relationship between the two major trading partners worsened after China informally imposed restrictions on some Australian imports including coal, barley and lobsters.

Ahead of federal elections in May, the Morrison government had stepped up its stance against China and its increasingly assertive moves in the region, in what is seen as an election strategy.

On the same day, Morrison spoke to members of Western Australia’s peak industry group, the Chamber of Commerce and Industry WA, cautioning them “not to put all their eggs in a basket” in their business dealings with China and said there were no guarantees the relationship with China would improve in the next few years.

He acknowledged trade with China was important but when faced with security issues, Canberra had a right to call out Beijing. He also urged businesses to manage their risks and exercise diversification.

He warned “the China” today was not the same as the one in the past and said bilateral relations between the two nations had sunk to new lows because China had “chopped off diplomatic discussions at a leader level or ministerial”.

“We’re not the ones who are applying bans on their export of products. We’re not the one who is insisting that they open up to more foreign investment in their country.”

“We have a liberal democracy and a liberal economy that is easing investment on our terms, on our national interest terms and will continue to do that.”

At the start of the bilateral conflict in 2020, after a call with then US president Donald Trump, Morrison asked for the World Health Organization to be given the same powers as weapons inspectors – which was synonymous with war – when investigating the pandemic in the central Chinese city of Wuhan.

Political observers say Morrison sees the approach of being tough on national security and milking rising fears of China and a broader xenophobia among Australians as his winning ticket at the upcoming elections.

‘Close the sky over Ukraine’, President Zelenskyy urges US Congress

Thousands of Japan homes without power after quake kills 4