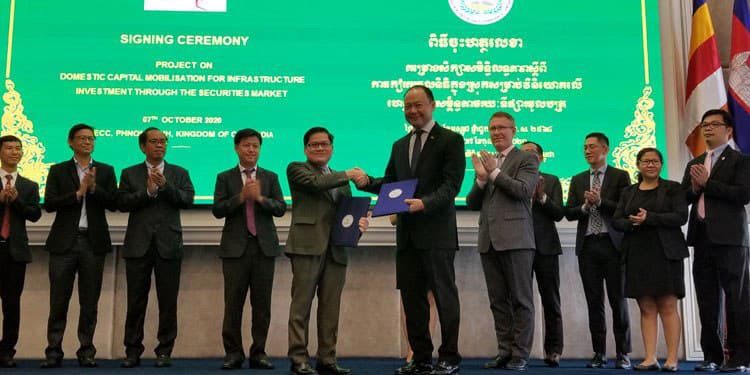 0
SHARES
17
VIEWS
Share on FacebookShare on Twitter
The Australian embassy has stated its 3i-SECC “infrastructure bond” project with the Securities Exchange of Commission of Cambodia (SECC) will still be viable after the implementation of Royal Cambodian Government bonds.

3i is an organisation comprised of engineers and financial experts managed by the Palladium Group on behalf of the Australian Department of Foreign Affairs and Trade. Speaking about the viability of the project, an embassy spokesperson said the issuance of government bonds would support the overall development of Cambodia’s domestic bond market. The “i” in 3i stands for Investing in Infrastructure.

The spokesperson outlined, in particular, the (upside of the) development of a market for infrastructure bonds because it would establish yield benchmarks and a sovereign borrowing rate, as well as a yield curve.

In addition, significant steps towards the issuance of government bonds, such as approval of the draft law, would also build confidence in the market around the viability of infrastructure bonds.

Current regulations require all corporate bonds and shares to be issued in local (riel) currency. However, according to the embassy, the 3i-SECC project may look at the possibility of revising requirements to allow the issuance of dollar-denominated bonds.

In addition, they may also explore structures where bonds could be riel-denominated and the issuer would take on the currency exchange risk and guarantee investors the equivalent (via) dollar-linked payment streams.

For many projects, the underlying cash flows are in US dollars, so taking on the currency exchange risk does not represent a major risk for an issuer, the embassy said.

In October the Australian government partnered with the SECC to launch the landmark Domestic Capital Mobilisation for Infrastructure Investment through the Security Market Project.

This article was first published in Khmer Times. All contents and images are copyright to their respective owners and sources.
Tags: 3i-SECCCambodia
Previous Post

Wearing someone else’s face: Hyper-realistic masks to go on sale in Japan

WHO vaccine scheme risks failure, leaving poor countries with no Covid shots until 2024