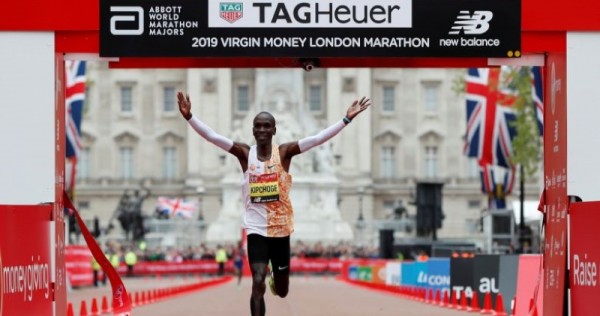 LONDON – More than 45,000 people have signed up to run the first “virtual” London Marathon in October after the actual race, already postponed from April, was cancelled last month due to the risk of coronavirus spread.

A multi-lap elite race, headlined by Kenyan world record holders Eliud Kipchoge and Brigid Kosgei, will take place on a closed course in a central London park on Oct 4 but, along with the rest of the world’s major races, the mass participation event was called off.

In an attempt to give disappointed runners an alternative target, and to help ease the impact on charities who benefit from millions of pounds of sponsorship, athletes were given the chance to run the 42.195km distance on their own on a course of their choice.

For £20 (S$36) they will be given their race number, a t-shirt and a finisher’s medal and can record their time on an app – with the only proviso being that they complete the distance within 24 hours.

After the initial allocation to runners registered for the original race, 20,000 further slots went on general sale, of which 51 per cent were taken by female athletes, with entries coming from 81 countries for what will be the 40th edition of the race.

“The response has been amazing and the spirit of the London Marathon will shine brightly across the globe on Sunday 4 October,” Hugh Brasher, event director for the Virgin Money London Marathon, said in a statement.

“We believe it is the biggest virtual marathon ever staged. It is also the most inclusive race in our history with runners having 23 hours, 59 minutes and 59 seconds to complete the 26.2 miles.

“We hope that millions will be raised for charities by our participants and we look forward to sharing their stories.”