At outbreak epicentre, South African students shrug off Omicron and fret about exams 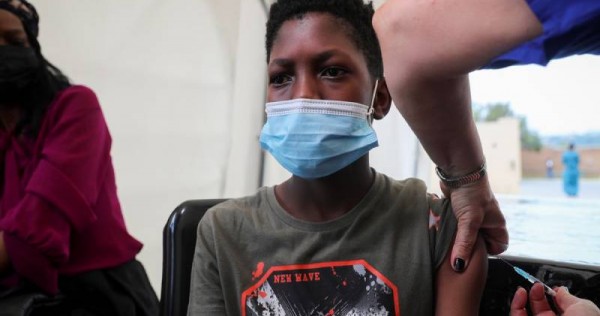 PRETORIA – The students knew their South African university was the epicentre of a new Covid-19 variant spreading panic across the globe, but over the past week many worried more about how Omicron would mess up exams and holiday plans than about catching it.

At the Tshwane University of Technology, in the capital Pretoria, learners languidly walked across the green campus shaded by trees, chatting, buying soft drinks, staring at their phones and sitting on benches overlooking a pond.

Most wore masks; a few didn’t. Many were vaccinated; some obstinately were not. Around 30 students interviewed by Reuters were mostly concerned about their classes being disrupted again. And whatever their opinions on the vaccine, the outbreak had done nothing to change their minds.

“This variant has messed us up. It means even more classes online, which makes it hard to learn,” management student Nqubeko Chisale, 21, said. “Sometimes the Internet link doesn’t work. I need to have the teacher in the room.”

Scientists are analysing Omicron to see if it evades the immunity conferred by vaccines or past illness.

The government meanwhile is pushing to try get as many people vaccinated as possible, while urging the cancelling of possible super-spreader events — like the big student parties and festivals popular this time of year.

Several have already been called off, including a music festival for young people on the coast, after 36 people tested positive for Covid-19 at the site.

Some early data seems to show more young people getting the severe symptoms typically suffered by their elders. But youths are also the least vaccinated: only a fifth of 18-34 year olds have had the shot, official data shows, partly owing to false beliefs about its safety proliferating on the Internet.

Chisale admits he belongs to the other four-fifths.

“So many things I’ve heard about the vaccine: it makes you sick, headache. Maybe someday, but I don’t think I’m ready,” he said, and he’s in no rush to change his mind, even with the fourth wave of Covid-19 surging through his campus.

‘Trying to persuade him’

Other students successfully ignored the mountain of false vaccine information, like 20-year-nursing student Sinethemba Nkosi. She and her friends all got the shot, except one — and he was the only one of them who got sick in the latest wave. Nkosi never caught it from him, even though they share a house.

“I was really encouraging him to get the vaccine, but he was worried about the side effects,” she said of her friend, who since last week has been in bed with a fever. But her bigger concern was the delay of the exams she’d been itching to finish.

At a lunch table shaded by a tree outside the university cafeteria, supply chain management students Thato Letsholo and Nkanyiso Sithole ate pork chops, complained about virtual classes, and disagreed with each other about the vaccine.

Asked if he was worried about the disease itself, Letsholo said: “Yes. I mean it’s killing people”. But his far bigger fear was more dreaded online learning and having to repeat a year if his academic calendar keeps getting delayed.

Letsholo’s mother is a nurse, so she convinced him to get the shot. “I’ve been trying to persuade him,” he said, indicating his classmate, Sithole, who mumbled something about waiting to see how his friend who’d just had it would do before risking it.

Sitting on beer crates under a tree, Tshepo Legon and his sports science classmate, Long Matimelami, said nothing but draconian regulations would get them to inoculate.

“This thing of vaccines is rubbish. I don’t want to take it,” Legon said. “I don’t care about the new variant. If I catch it, I’ll just take my traditional remedies.”