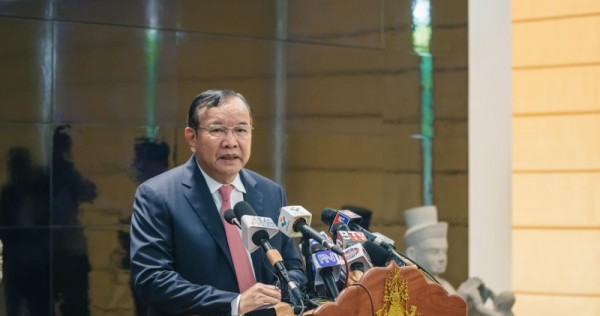 PHNOM PENH – A Southeast Asian envoy said on Wednesday (March 23) he had urged Myanmar’s ruling military to show restraint during offensives and was told by the junta leader there would be no access to ousted leader Aung San Suu Kyi while her trial was ongoing.

Mr Prak Sokhonn, special envoy for the Association of Southeast Asian Nations (Asean), said he sought the release of prisoners including Australian economist Sean Turnell, and junta boss General Min Aung Hlaing told him he would consider a request to see Ms Suu Kyi and other detainees in future.

Ms Suu Kyi was overthrown by the military in a coup last year that sparked chaos and bloodshed in the country after a decade of tentative democratic reform.

The Nobel laureate is on trial for more than a dozen offences including violating a state secrets act and multiple counts of corruption. She has been found guilty of several crimes already, but has rejected all charges.

Mr Prak Sokhonn said he understood that critics viewed his trip to Myanmar this week as legitimising the junta.

But he added he sees the two-day visit as a positive step towards resolving the crisis, which he said could not be done during Cambodia’s Asean chairmanship this year.

“The Myanmar issue is complicated, it needs a long time to solve, we can’t solve it during one chairmanship or the current chairmanship,” he told reporters on his return to Cambodia.

“I know of various levels of expectations on the visit, I also know of people who want to see a ceasefire and me meeting all involved parties, and the return to normalcy of democracy,” he said.

“I understand reasons behind criticism, they don’t want me being giving legitimacy to the state councillors,” he said, referring to the junta.

Mr Prak Sokhonn’s trip has frustrated opponents to Myanmar’s junta because it was centred largely on the generals, with most meetings with other parties cancelled.

Asean has barred the generals from attending its summits until they see progress in a five-point “consensus” agreed last year to end the violence.

The United Nations last week said the army had committed war crimes and crimes against humanity and was deliberately targeting civilians. The military has yet to respond.