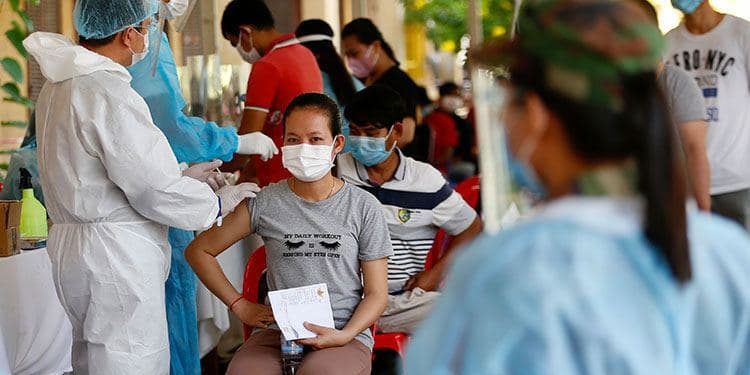 Cambodia’s economy will grow more slowly than previously forecast, according to the ASEAN+3 Macroeconomic Research Office (AMRO). It cut its 2021 gross domestic product (GDP) forecast to 2.8 percent from a March forecast of 4 percent.

AMRO says growth will bounce back next year to 6.6 percent thanks to the speed of the Kingdom’s vaccination campaign.

“Cambodia had been one of the strong performers of the region until the pandemic hit. Unfortunately Cambodia is very dependent on tourism and the garment industry, both of which were hit really hard because of the disruptions to the supply chain and production as well as the shutdown of the border. That’s why the economy has been struggling,” said AMRO Chief Economist Ho Ee Khor.

“On the other hand the government has a lot of fiscal space and has been using it to support businesses. Because of that we are quite comfortable. They have done a lot to ramp up the vaccination rate so we feel comfortable that next year Cambodia will be able to open up much more than many other countries and, when that happens, it will be able to attract tourism back. At the same time the garment industry is recovering,” he said.

AMRO also cut its GDP forecast for the ASEAN+3 region, which includes China, Japan and South Korea. It forecasts an average 6.1 percent growth, down from its March forecast of 6.7 percent.

AMRO said regional economies will probably grow by 5 percent next year as vaccination campaigns gather pace and governments and businesses start to get an idea of what the “new normal” will look like. AMRO sees this as stronger growth because it comes from a higher year on year base because there was zero growth in 2020.

AMRO sees six risks to growth next year. The first is repeated waves of Coronavirus. While vaccines offer protection, AMRO warns that authorities will try to contain outbreaks, which will drag on growth. Secondly AMRO says the withdrawal of fiscal stimulus will put financial stress on businesses and households, warning that some companies won’t survive. Thirdly, continued tensions between the US and China may hurt trade, although AMRO does not believe the rest of Asia will be hit too hard. Fourthly, the US Federal Reserve may tighten monetary policy, triggering capital outflows from Asia. The final two risks AMRO sees are a financial or sovereign debt crisis in the region because of rising government debt.

“The region is adapting and learning to function within the more uncertain environment,” AMRO said. “The pandemic has altered the way businesses and consumers transact, accelerated digitalisation and led to the emergence of new business models and types of firms. Rising protection and immunity are also allowing some resumption of travel,” it said.

AMRO warned against withdrawing fiscal and monetary policy support too quickly, saying any tightening “needs to tread the fine line between preserving the remaining policy space and supporting the rebound.” It recommended a gradual phasing out of existing policies and said governments and central banks will need to make sure businesses are informed of any tapering well in advance to avoid any shocks to the system.

Even as stimulus is withdrawn, AMRO said governments should continue to support hard-hit sectors while ensuring an even recovery to avoid social inequality. It said governments need to capitalise on the growing adoption of e-commerce to bring about a smooth transition to a new digital economy.

AMRO is an economic surveillance organisation that aims to contribute to economic and financial stability in the region.