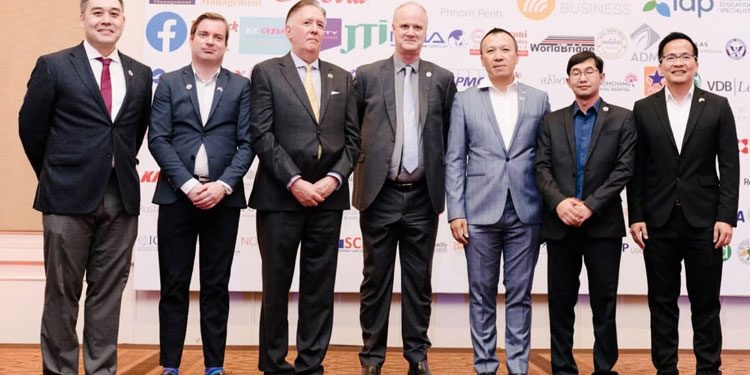 The American Chamber of Commerce in Cambodia (AmCham) has begun the process of electing six (out of nine) new board members. The new board, once selected, will elect a new president later this week.

The chamber announced the 16 candidates vying for board membership on Friday, also stating that the chamber has sent hard copies of ballots to all AmCham members qualified to vote (currently around 110), encouraging qualified voters to return their ballots as early as they can.

The vote for a new president was necessitated by current President Allen Dodgsan Tan having reached the constituted two-term limit.

According to AmCham regulations, candidates are elected by members to the board of governors annually with a two-year term limit. Board members must step down following two consecutive terms for a period of one-year before becoming eligible to run again.

The results of the election will be announced at the AmCham Annual General Meeting on Nov 24 at Raffles Hotel in Phnom Penh.

Speaking to the Khmer Times about his tenure, Tan outlined that the chamber has been transformed financially with a renewed level of membership and staff engagement.

“Over the past two years, AmCham has transformed remarkably. Looking back on my first term as president, we took over with no executive director in place, our finances in near ruin and with very little member engagement.  The chamber was in trouble,” Tan said.

“The AmCham you see today as we go into this election has a strong financial foundation [despite COVID], with a slate of superior programmes and outstanding member engagement. This is demonstrated clearly by the number and quality of candidates running for election,” he added.

Tan also said that he would continue to be active in the AmCham community and would not rule out running for re-election again after his mandatory one-year break.

“Due to mandatory term limits, I am not running this election cycle – but, rest assured, I will continue to be available to the community. If AmCham can benefit from my efforts, I would certainly consider another term in the future,” he said.

One of the most prominent of those seeking re-election and considered a top contender to take over
from Tan as president is Group Chief Executive Officer of Cambodian Investment Management Holding Anthony Galliano.

Galliano, however, said that he did not want to comment on the election publicly until after the results.

First time candidate RMA Business Development Manager Michael Berg said he is looking to be elected to the board, having been active in the local business community since moving to Cambodia in 2016.

“As a representative of one of the largest US companies in Cambodia, whose owner [Kevin Whitcraft] was the driving force behind AmCham’s foundation and a founding member, I am interested in becoming even more active in AmCham, providing a current business perspective to the board,” he said.

“In the past few years, I have worked closely with AmCham and the US Embassy to further our business interests and advocate to the Cambodian government,” he added.

The backgrounds and election pitch of all 16 candidates can be found on the AmCham website or through official social media channels.