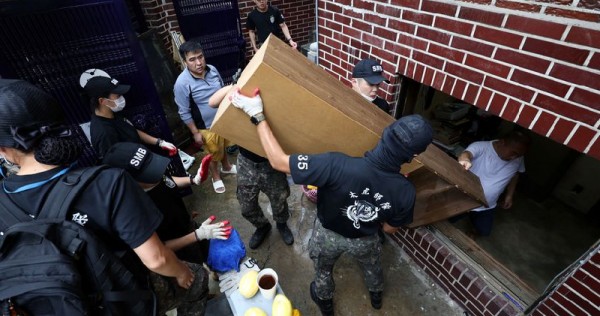 South Korean capital Seoul’s infamous semisubterranean homes – similar to the dwellings depicted in the Oscar-winning film Parasite – have come sharply in focus following this week’s record downpour in the country.

On social media, numerous anecdotes and videos have been circulating on how the country’s most vulnerable people who live in these homes, called ‘banjiha’, were trapped in their homes as floodwaters rose.

A widely circulating video showed three men struggle to break open a window with a fire extinguisher and a spanner to save a man trapped in one of these homes.

Lee Seung-hoon, 28, tried to escape through the single door of his underground flat but strong water pressure from the flood kept the door tightly shut.

His neighbours in the Sillim-dong subdistrict had no choice but to take matters into their own hands and rescue him.

Seoul’s emergency rescue services were stretched thin this week by what President Yoon Suk-yeol called Seoul’s heaviest rainfall in over a century.

At least 12 people were reported to have been killed following the floods, which caused landslides, the flooding of banjiha homes and metro stations as well as the disruption of electricity in some parts of the sprawling metropolis.

Lee’s rescue was a sharp contrast to the tragic death of a family of three that drowned in another submerged semi-underground flat in the same neighbourhood.

Public pressure is now intensifying on President Yoon and Seoul authorities to move quickly on banjihas, with critics saying the government’s immediate remarks following the deaths – indicating a need to ban banjiha homes – was all too familiar.

“In the future, in Seoul, basements and semi-basements (banjihas) will not be allowed to be used for residential purposes,” the Seoul city government said in a statement on Wednesday (Aug 10). Officials have made similar pledges in the past.

Banjihas were first thrust into the spotlight in 2019 by the success of Bong Joon-ho’s Oscar-winning film Parasite that made history as the first foreign language film to win the best picture award.

The movie portrayed a family of four scheming to move out of their dingy, musty banjiha as they struggled with Korea’s yawning socio-economic divide.

Following the film, the Seoul city government in 2020 provided 1,500 banjiha households with up to 3.2 million won (S$3,368) each for renovation to improve comfort and safety levels in the apartments.

But this barely covered the 200,000 such flats in Seoul that accounted for 5 per cent of all homes in the city.

South Korea has had little success in its previous efforts to move banjiha residents and to limit the construction of such apartments. A 2010 government announcement to restrict banjiha construction failed to gain traction as such flats were hugely-favoured by low-income workers who could not afford a longer daily commute to work.

Seoul’s effort in the last decade to rehome banjiha residents into low-rent, state-owned apartments also came to a standstill as such homes were too few, far-flung and costly.

In 2021, just 247 banjiha households were rehomed into state-owned, rent-controlled apartments in Seoul.

Banjihas can be traced back to the 1970s when the government mandated that basements be built in case of an attack from North Korea. Building code changes in the 80s allowed such flats to be built half above street level.

Rapid urbanisation and rural-urban migration since then have boosted the popularity of such low-cost flats, now often a last resort for financially-strapped South Koreans.

In renewed efforts to rehome banjiha residents, Seoul will provide 120,000 wonper month for banjiha tenants to move to higher ground. But the sum is a mere fraction of typical rent in the city, where a small flat in Sillimdong district costs 500,000 won in monthly rent and requires a 50 million won deposit.

For the long term, the government plans to raise the supply of low-priced government-owned rental homes but did not elaborate on this.

But banjiha tenants and social activists have already panned such efforts, accusing them of being cursory measures that fail to address deep-rooted societal issues.

“The government’s urban planning is only aimed at erasing low-rent tenements and houses that are seen as eyesores in the capital,” said Kim Yoon-young of the Korean People’s Solidarity against Poverty, an activist group that tries to improve living conditions of low-income groups.

“The government’s plan should aim at providing financially affordable and safe homes for the underprivileged rather than removing banjiha rooms”, she said.

A resident of the Sillim-dong subdistrict said on SBS TV: “If the government wipes out banjiha flats, then where should people like me go? Do they want us all dead?”