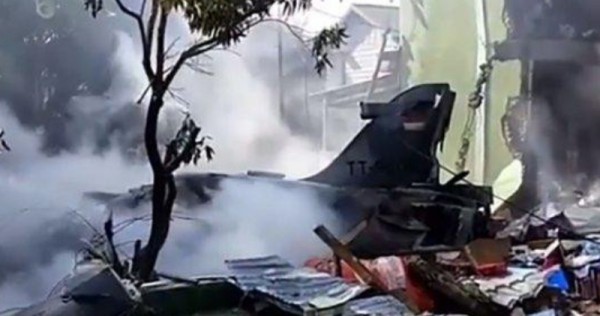 At least three houses were damaged after an Indonesian Air Force Hawk 209 jet fighter crashed and burned in a residential area of Kampar regency, Riau, on Monday morning.

In a statement obtained by The Jakarta Post, Air Force spokesman Air Commodore Fajar Adriyanto confirmed that the British-built aircraft, registered as TT-0209, had departed from Rusmin Nuryadin Air Base in Pekanbaru on Monday before crashing about 4 kilometres away in Kubang Jaya village, Siak Hulu subdistrict.

“The crash occurred at 8.13 am when the aircraft was about to land from its routine drill,” Fajar said.

According to a preliminary investigation by the authorities, when the aircraft was approaching runway 36 of the airbase, the jet fighter had lost its power and fell onto two houses in the area. Although the houses were vacant at the time of the accident, the aircraft was totally destroyed, Fajar added.

The pilot, First Lt. Apriyanto, was able to eject himself and survived the accident, Fajar said. Apriyanto is being examined at Dr. Soekirman Air Force Hospital in Pekanbaru.

“The pilot landed in the bushes. He was immediately helped by the residents and later taken to the ambulance with bruises around his face,” said Reni, a resident, as quoted by tribunnews.com.

“There were no fatalities in the incident,” Fajar said, adding that his institution would further investigate it.

Kubang Jaya village head Tarmizi said he was informed of the crash at 7:30 a.m. and that the accident took place behind Siak Hulu 1 state junior high school.

“It crashed in the residential area,” he said as quoted by kompas.com on Monday.

Before it crashed, some of the residents of Kubang Jaya village said they heard explosions in the sky.

“They were pretty loud, and afterwards I saw the aircraft fell onto the houses and burned,” he said as quoted by kompas.com.

Rahmat, 60, said he heard three explosions, one much louder than the others.

At the time of the incident, Rahmat and the other residents ran out of their houses immediately after hearing the explosions and later found that the aircraft had burnt down on the ground after hitting houses that belong to other residents.

The aircraft was one of 34 Hawk 209 aircraft that were purchased by the Indonesian Air Force in 1993, making Indonesia one of the largest users of this type of military jet.

The accident on Monday occurred days after an Indonesian Army Mi-17 helicopter crashed in Kendal, Central Java. Four out of the nine passengers died at the location of the crash, while five others were taken to the hospital for treatment.

The fatalities from the crash increased to five after one of the survivors died on Saturday. First Lieutenant Vira Yudha died after being hospitalised for a week at Dr. Kariadi General Hospital in Semarang, kompas.com reported.

The remaining survivors, on the other hand, have shown improvement and continue to receive treatment at Dr. Kariadi Hospital and Gatot Subroto Army Hospital in Jakarta.