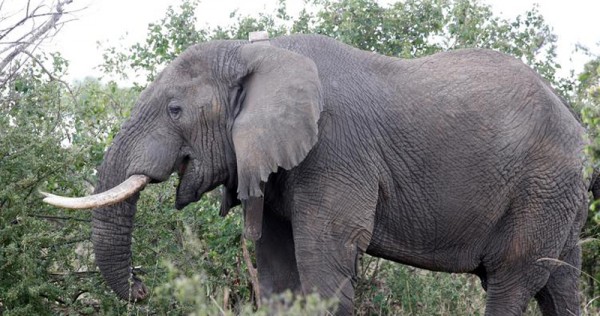 Three people were arrested in Riau on Wednesday for allegedly trading elephant tusks.

They were identified as YP, a 52-years-old teacher from Jambi, YS, a 52-year-old man working for a private company, and WG, a 68-year-old farmer from Riau.

“Each individual has a different role. YP was the seller, YS acted as the middleman, while WG was a potential customer,” Riau Police special crime department head Sr. Comr. Andri Sudarmadi said on Friday.

Local authorities first received a tip about illegal ivory trading several months ago, he said, prompting the Riau Police to form a special investigation team to track down the perpetrators involved.

On Wednesday, the team followed the three suspects as they drove from WP’s house to a workshop in Jake village, Central Kuantan, a district in Kuantan Senggigi regency.

The three were arrested as they were making a transaction inside the workshop at around 11 a.m., Andri said.

Police personnel found two 80-centimeter-long elephant tusks wrapped in a burlap sack in the suspects’ car. The tusks were carved and filled with cement.

“We suspect that the potential buyer planned to resell the tusks in Pekanbaru,” he said. “We’re currently investigating the case further to track down and arrest the poachers involved.”

The police are coordinating with the Riau Natural Resource Conservation Agency (BBKSDA) to determine where the tusks came from.

According to the police, the suspects told them it was their first time attempting to trade elephant tusks.

“They were interested in selling elephant tusks because of their high economic value. A pair of tusks can cost Rp 100 million [US$7,033],” Andri said.

The suspects were charged under Article 21 and Article 40 of Law No.5/1990 on natural resources and ecosystem conservation and Article 55 of the Criminal Code, which carries a maximum sentence of five years in prison and a fine of Rp 100 million.

Poaching is a major cause of elephant deaths in the country every year. The problem is exacerbated by rampant deforestation, which has reduced the elephants’ natural habitat and brought them into conflict with humans.

Philippines hunts for dozens missing after its deadliest typhoon this year