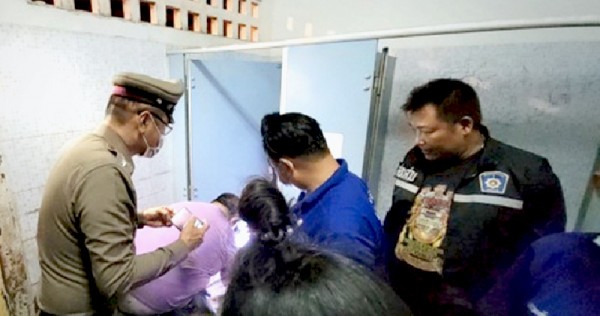 Two men were found dead inside a toilet at a market in Samut Prakan’s Samrong Nuea sub-district on Tuesday (Nov 18) night with syringes in their hands.

As the toilet was locked from inside, police investigators climbed the wall to find one man sitting on the toilet seat and another lying on the floor.

The man on the floor was holding a syringe in his left hand, while the other looked as if he were about to inject his right arm.

A sachet of illegal substance was also found near the bodies.

A cleaner called the police after she realised that the door had been closed for too long. When she got no response from knocking on the door, she peeked inside and saw the two unconscious men.

Police believe the men may have died from a drug overdose, and had been dead for more than four hours before being discovered. The bodies have been sent to the Institute of Forensic Medicine for autopsy.