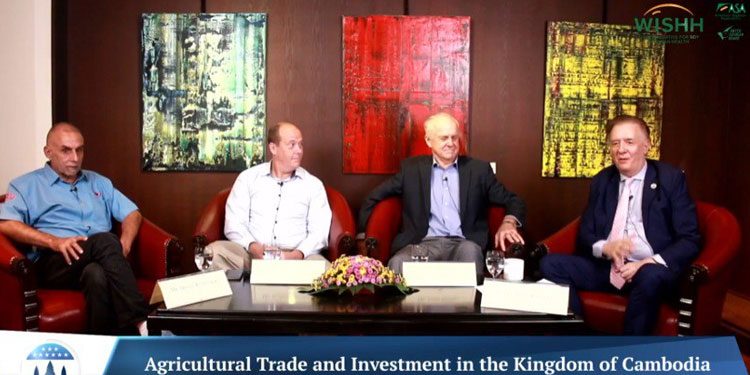 The United States Department of Agriculture (USDA) is to fund a major aquaculture development project as part of the US government international food security support programme called the Commercialisation of Aquaculture for Sustainable Trade (CAST).

CAST is a project to accelerate production of high-demand fish species for the Cambodian market and will develop a lasting aquaculture industry and promote Cambodian-raised fish. It will strengthen local production of high quality fish food and build a profitable market system for aquaculture products. Through CAST Cambodia’s private sector and universities are to work closely with US soybean growers and businesses as well as academic institutions and nongovernmental organisations.

The American Chamber of Commerce (Amcham) in Cambodia held a webinar yesterday on several topics including CAST where James Hershey, chief of party of CAST, said: “One of the main focuses will be on the teaching of the 600 commercial fish farmers selected to transport the fish safely: for example not transport fish at mid-day and, if you have to, transport them in shade. He added: “We have already provided a 50 page manual to these fish farmers as a guideline to follow.”

He added: “CAST will also support everyone from the fish collectors, wholesalers, processors right the way to the hotel/restaurant/cafe (HORECA).”

The agricultural sector in Cambodia accounts for 22 percent of its gross domestic product (GDP) and employs 3 million people, so is critically important to the overall success of the economy.

Aquaculture is the production of aquatic organisms under controlled conditions (i.e. fish and shrimp farms) throughout part or all of their lifecycle. Its development can help meet future food needs and ease burdens on natural resources.

CAST, which is part of the USDA’s food for progress programme, is aimed at increasing the scale and scope of freshwater aquaculture in Cambodia by accelerating improvements in management, feed and other inputs.

Anthony Galliano, president of Amcham, told Khmer Times yesterday: “The importance and the growth potential of the United States and Cambodian bilateral trade relationship at times is not given recognition and prominence. The United States is the second largest importer of agricultural products by country and can be a huge opportunity for the Kingdom. I am very proud of CAST Project, which is US- government funded to the tune of $17 million, targeted at the growth and development of freshwater aquaculture.

“The fisheries sector plays a crucial role in the economy of the country, employing 6 million people in fisheries or fisheries-related activities. Fishery products represent about 10 percent of gross domestic product. The value of the industry is approximately $1.5 billion per year.

“There is rightfully so a more prominent focus on trade and foreign direct investment. However, this is a development project to support eventual fishery independence and elevate Cambodia into a major exporting nation of fish products.”