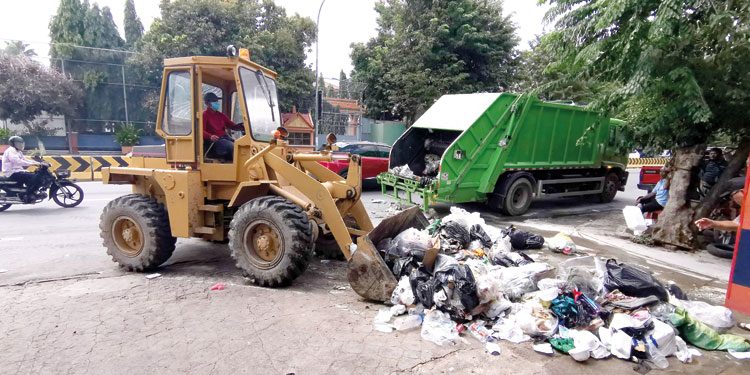 Global Green Growth Institute (GGGI) Cambodia, part of an international organisation, based in Seoul, South Korea that aims to support green city planning, is currently busy with recycling and energy recovery projects in​​ Battambang province. There are also plans to create a mechanical and biological treatment facility in Phnom Penh.

Jerome Fakhry, senior regional officer for GGGI, said: “To be able to recycle plastic, you need to have clean plastic.” He explained that once plastic becomes dirty from mixing it with biological waste, it becomes far too expensive to recycle efficiently. “What you need is to start by sourcing, separating it and then transporting it directly to a recycling facility. That’s the only way to do it in Cambodia right now.” He adds that dirty plastic can still be used for energy recovery.

The goal of these projects is to create a sustainable industry around reducing waste in the Kingdom.

For insight, Fakhry said every year, 8 million tonnes of plastic reach the oceans worldwide, the equivalent of a full garbage truck a minute. As much as 93 percent of it comes from 10 major rivers including, the Yangtze, Yellow, Hai, Pearl, Amur, Mekong, Indus rivers and Ganges Delta in Asia, and the Niger and Nile rivers in Africa.

The source separation of recyclables in the project in Battambang required a few steps starting with setting up an infrastructure and the mechanisms for collecting the plastic and making sure it doesn’t get mixed. The main areas of focus for separating and collecting plastic bottles and bags are in schools and markets because the plastic waste is sold to recycling facilities, generating a small income for schools and market cleaners. Fakhry said that an essential part of this project was educating the target parties.

“What we founnd in Battambang, for example, is that everything was working really well in the markets. There was a lot of plastic being collected in schools also, but when we came back in 2020 people had already forgotten.”

Fakhry said they chose Battambang province because there is already a company that focuses on collecting and cleaning plastic waste, which can be used as a raw material for making new products. The project supports recycling businesses in Battambang with training in their financial systems, business structuring, strategy and modelling. They also receive assistance with networking for more waste suppliers.

With United Nations Industrial Development Organization (UNIDO) funding, a facility to make building materials such as tiles and bricks from plastic and glass waste is being set up near the landfill in Battambang. UNIDO is an agency that assists countries in economic and industrial development.

In Phnom Penh, GGGI is planning to open a mechanical and biological treatment(MBT) facility. An MBT facility aims to stabilise and separate waste that is not suitable for recycling, extract recyclable materials and produce fuel. The MBT functions through mechanical processing to recover recyclable materials, remove contaminants such as glass and stone, remove moisture and increase the calorific value. The main output of the machine is refuse-derived fuel, which can replace coal in cement kilns.

Toxic organic compounds are destroyed in the flames or 1,500 degrees Celsius heat. GGGI believes that the treatment facility can become a sustainable business if more than 1,000 tonnes of waste gets treated a day.