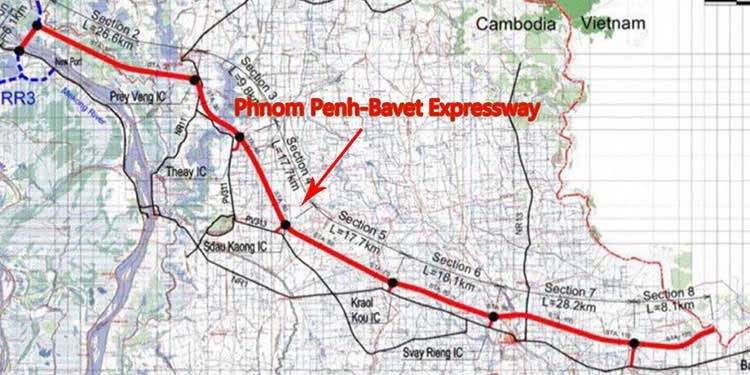 The Ministry of Public Works and Transport (MPWT) yesterday signed a framework agreement with China Road and Bridge Corporation (CRBC) to enable the two counterparts to continue negotiation to set the details of the Phnom Penh-Bavet Expressway Project (PP-Bavet Expressway) before reaching public-private partnership agreement for implementation.

The framework agreement was signed by MPWT Minister Sun Chanthol and Chen Zhong, Deputy General Manager of China Communications Construction Group Co Ltd (CCC) — the parent company of CRBC based in Beijing — during a ceremony attended by senior government officials from various relevant ministries and delegates of CCC at MPWT.

Chanthol said PP-Bavet Expressway Project will be extremely significant not only for Cambodia but also the region’s connectivity as a whole because the expressway—the Highway Number 1 of the Association of Southeast Asian Nations (ASEAN) will link China through Myanmar to Thailand, Cambodia and Vietnam.

“We’ve tried very hard. We did our best efforts to try to complete the public-private partnership contract ahead of the visit of the premier but we could not reach that finishing line. We are very close to reaching that finishing line … It is very good that we have an expressway that links various countries to improve or facilitate trade and investment,” Chanthol said, acing that Cambodia is in the centre of the Greater Mekong Sub-region.

Chanthol also said it is extremely important for both parties to reach the Public-Private Partnership Agreement (PPP) as soon as possible in another ceremony to be attended and witnessed by the leaders of the two countries — most likely during Prime Minister Hun Sen’s official visit to China in 2023 — to arrange groundbreaking sometime next year and to complete the construction by the end of 2026 or early 2027.

Nguyen Van Thang, Vietnamese Minister of Transport, informed Chanthol on Tuesday at MPWT that Vietnam’s expressway between Ho Chi Minh City and the Moc Bai border gate with Cambodia will be completed around the same time as the completion of the 138km PP-Bavet Expressway Project that costs about $1.63 billion.

“All we need to do is to agree on the connecting point… we need confirmation in writing from Vietnam to ensure that the connection is done at a proper location. I think that the project will move forward,” he said, adding, that the map indicates that the expressway from Ho Chi Minh City to Moc Bai through Vietnam’s National Route 22 is expected to be connected with the expressway from Bavet to Phnom Penh at length pole number 164.

The PP-Bavet Expressway Project would also include a 5 km bridge across the Mekong River — both bridge and road. “We need the confirmation in writing to let us know the specific location so that we can make a proper design or buy of land properly at the location of joint connection,” Chanthol added.

The second expressway of Cambodia will be connected to the Poipet border with Thailand from Phnom Penh through ASEAN Highway 1 which will be expanded to 4 from 2 lanes. PP-Bavet Expressway is expected to serve the Phnom Penh Logistics Complex (PPLC) Project — to be completed at the same time as PP-Bavet Expressway Project  — and vice versa, according to Chanthol.

“When we build the expressway, we will also set up two different gates at the border points to separate the gate for goods from the gate for the tourists… These are the developments of infrastructure sectors and the growth of our country,” he said, adding that PPLC Project worth about $200 million in a plan will be unveiled today in a ceremony attended by Aun Pornmoniroth, Minister of Economy and Finance.

Chen, Deputy General Manager of CCC, said the PP-Bavet Expressway will become a driver of the social and economic developments for Kandal, Prey Veng and Svay Rieng provinces, while it will improve the connectivity between Cambodia and Vietnam by facilitating the flow of people, goods and capital across the border significantly.

Chen added that CRBC has completed the construction of the Phnom Penh-Sihanoukville Expressway project ahead of schedule. “The operations have been smooth and improved our capabilities and efficiencies. That is why we are confident in building the second expressway … the signing of the framework agreement is a good start of further negotiation and implementation,” he said.

Chen also said the PP-Bavet Expressway Project is believed to be successfully materialised and implemented, while CCC looks forward to signing the PPP Agreement in the near future to open a new chapter in the win-win cooperation and friendship between Cambodia and China after the further negotiation reaches a cross point between the two parties.