Thai monks ordered not to join protests in Thailand 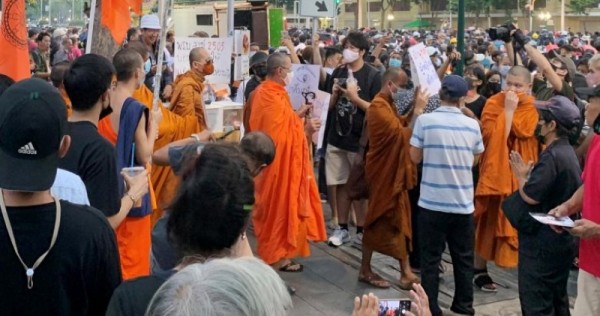 BANGKOK – Thailand’s Buddhist governing body on Wednesday (Nov 11) ordered monks not to join protests that have been taking place for months against Prime Minister Prayut Chan-o-cha and to demand curbs on King Maha Vajiralongkorn’s powers.

“The Supreme Sangha Council made resolutions to prohibit monks and novices from involvement in politics, including joining protests and expressing political opinions,” a spokesman for the government’s National Office of Buddhism said.

More than 90 per cent of Thais are Buddhists and religion has traditionally been seen as one of the pillars of Thai society, along with nation and monarchy.

Although there has not been widespread participation by monks in protests that have drawn tens of thousands of people, some have joined the crowds in their saffron robes.

“I will continue to join the protests to let them know that this is not right and inconsistent with the voices of most monks,” said Mr Chistnupong Praiparee, 21, a monk who has attended three protests.

He said that he wants reform of the Supreme Sangha Council in addition to the other demands of protesters.

The protesters seek the removal of Mr Prayut, a former junta leader who kept power after disputed elections last year.

They also want a new Constitution and a reduction in the powers of the monarchy, saying it has enabled decades of domination by the army.

Under Mr Prayut’s junta, the King was given the power to appoint Thailand’s chief monk to head the Sangha, even if the council had picked another candidate.

Thai monks are not allowed to vote and were already barred from politics in principle.

They have never played such a large part in Thai politics as the monks who helped push neighboring Myanmar towards democratic reforms over a decade ago.

But one now-defrocked monk, Buddha Issara, was among leaders of royalist protests against the elected populist government Mr Prayut toppled in 2014.

Thailand’s official Islamic body, representing the Muslim minority, organised a show of support for the monarchy on Tuesday.