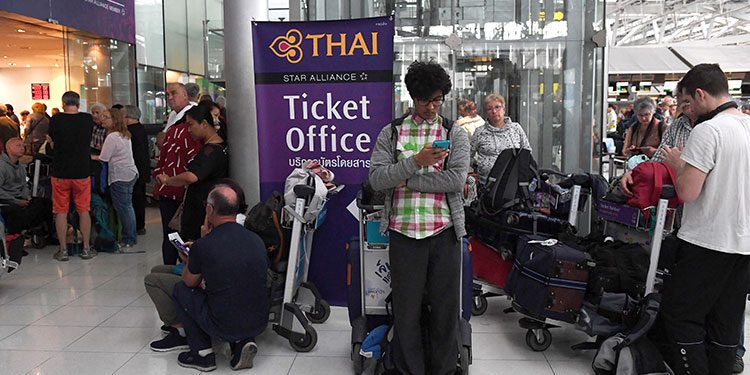 Many Indian passengers who recently travelled to the Cambodian capital Phnom Penh complained that Thai Airways have been insisting on seeing $1,000 in cash per passenger before issuing boarding passes. The Indian Embassy has also received several complaints from many of its citizens who travelled to Phnom Penh.

Some workers, who were travelling to Phnom Penh on workers’ visas and boarded a Thai Airways flight to reach the Cambodian capital, complained that the airline staff insisted on seeing $1,000 in cash per passenger.

The passengers, who want to remain anonymous, said that the airline staff wasn’t ready to accept multi-currency prepaid travel cards, credit cards or balances in their bank accounts.

Despite us  telling them that  we can  provide valid credit cards and bank balance,  the staff insisted on verifying $1,000 in cash per passenger. We  don’t  know why we have  been treated like this? We have travelled to  several  places,  and  this  is the first time we have been witnessing something like this.”

The passengers’ plight was much of the same when it came to Singapore Airlines, where the officials reportedly insisted on seeing $1,000 in cash from Indian passengers.

Although Khmer Times reached the two airlines via emails and Telegram messages to get their reactions on this contentious issue, both haven’t responded until going to the press yesterday.

According to sources, some travellers have been denied boarding due to these specific regulations for Indian passengers.

“It is plain harassment. The airlines are creating their own rules. They may ask to see the bank account details, but why insist on cash,” one passenger, who reached Phnom Penh on a work permit, told Khmer Times.

When contacted, the Indian Embassy said it would take up the matter with the concerned authorities in Cambodia.

A top Indian Embassy official told Khmer Times, “Some Indian nationals who travelled to Cambodia from India via Bangkok have brought this matter to the notice of the Embassy. The consular Wing of the Embassy is looking into the matter with all seriousness it deserves and will be taking up the matter with the concerned authorities in Cambodia.”

“As we have not received any official communication from the Cambodian Ministry of Interior or Ministry of Foreign Affairs and International Cooperation on the imposition of any such special conditions on Indian nationals travelling to Cambodia, we presume that this is not the official policy of the Royal Government of Cambodia and expect all airlines operating flights to Cambodia not to impose any additional restrictions on their own,” the Embassy said.

Thai Airways has been operating direct flights to and from four cities in India, including Delhi, Mumbai, Chennai and Bengaluru.

In April, the Ministry of Tourism proposed to the Indian government for direct flights between both countries to boost tourism. The ministry and Indian Embassy have also signed Memorandums of Understanding in this regard.