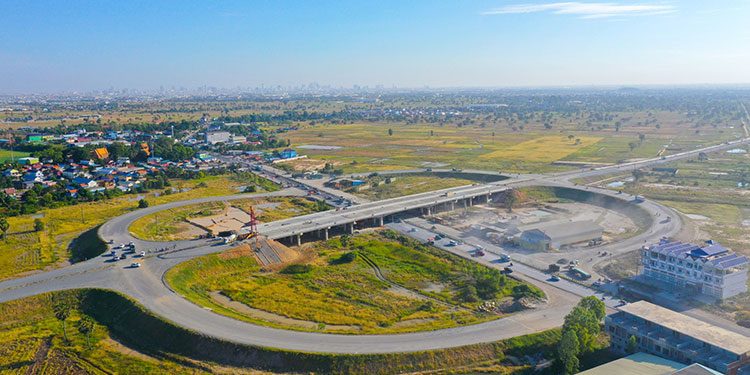 Construction of the Ring Road 3 project started in January 2019 at the cost of $267.67 million under co-financing by China and Cambodian government

The much-anticipated Ring Road 3 project is expected to be completed in September this year, the Ministry of Public Works and Transport (MPWT) said in a release. As per the reports of the Project Implementation Unit (PIU) on Tuesday, Ring Road 3 will connect National Road 4 to National Road 1 at a length of 53 kilometres has been completed by 76.87 percent as of July 25.

“The project will become a new big and modern ring road that will serve transportation industry,” the report said, adding that it will start at kilometer 14+105 in Chumpou Vorn village of Chom Chao 3 quarter in Pur Senchey district and extend through National Road 5 to Win-Win boulevard and National Road 6.

The project will also connect to National Roads 4, 3, 2 and
21 through Bassac River and Anlong Chin Island and finish at National Road 1 at kilometre 24+840 in Sdao Kanleng village of Dei Eth commune of Kien Svay district in Kandal province, according to the release.

Further, the release added that the ring road will connect container terminal of Phnom Penh Autonomous Port in Kien Svay district and be complementary to Asean highways AH1 and AH11 and main corridor roads as central and southern economic corridors of the Great Mekong Sub-Region.

The construction of the Ring Road 3 project started in January of 2019 under implementation by Shanghai Construction Group
Co., Ltd. with $267.67 million cost of investment and under supervision by Guangzhou Wanan Construction Supervision Co., Ltd. that charged $5.38 million under co-financing by China and Cambodian government.