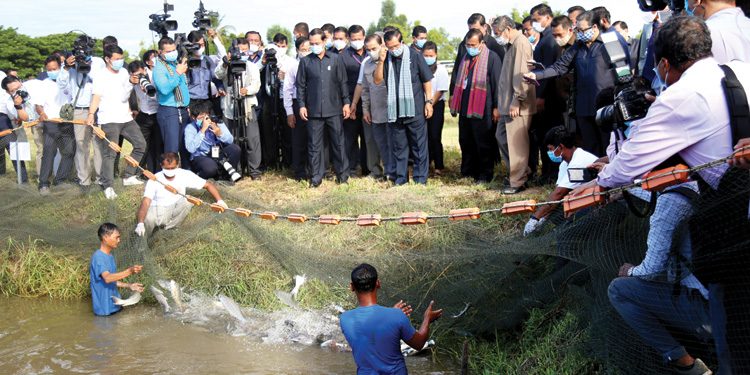 Prime Minister Hun Sen has reiterated the need to use the COVID-19 crisis to improve the Kingdom’s agriculture and expects to export more food products while pushing aquatic farming.

Speaking to fish farmers during a visit to the Freshwater Aquaculture Research and Development Centre in Prey Veng province yesterday, Mr Hun Sen said that Cambodia’s aquatic sector produced 50,000 tonnes of fish in 2009 and increased that to more than 374,000 tonnes in 2019.

“According to this result, the country’s fish production has increased about 20 percent a year and if we could increase more, we not only supply local demand but will be able to export to the region and the world as well,” he said.

The Prime Minister has also instructed the Ministry of Agriculture Forestry, and Fisheries (MAFF) to increase more aquafarming specialists to improve the supply of fish as well as the process for exports.

“Vietnam exports $3 billion of tilapia fish a year so we need to learn the technical side of things from neighbouring countries that have more experience and better technology,” he said. “We cannot rely on fishery products from a lack of river any more. We need to promote the aquatic sector, grow more, raise more animals and process food to export.”

According to the Prime Minister, the government has released $500,000 this year to develop the fisheries industry.

Currently, there are 46,000 families in Prey Veng involved in the business and the Prime Minister wants to push the number to 100,000 families.

“If it’s not enough, we will put more money into the business. We want Prey Veng province to be a home of catfish and we call on migrant workers from Thailand to join the agriculture sector ”, he said.

At the same time, Mr Hun Sen also asked local businessmen to invest in animal feed processing factories
to reduce imports while the government will provide some incentive for the investment.

“The challenges would the high cost of electricity. The Agricultural and Rural Development Bank (ARDB) will provide financial support. We could reduce electricity costs for animal feed production investment and we need study how much it will cost,” he said. “If the private sector does not have enough funds, entrepreneurs can join with the state so we can create jobs and self-reliancy.”

To promote the Kingdom’s agriculture sector, especially for raising animals locally, Mr Hun Sen has rejected
an import request of 1 million pigs from neighbouring countries and is encouraging Cambodian farmers to boost the domestic raising of farm animals.

“One company submitted a request to me asking to import 1 million pigs from Thailand but I didn’t allow and if I had agreed, I will be the one who killed our local market, so we need to take this opportunity to be self-reliant,” he said.

Cambodia needs a total of 290,000 tonnes of meat per year while currently it can supply only 239,000 tonnes annually, he said.

According to MAFF, there are seven companies that have obtained licences to import live pigs from neighbouring countries. However, the ministry has temporarily banned two companies, saying that they have abused the ministry’s regulation on imports.

The remaining licenced firms imported a total of 4,000 to 5,000 of the animals a day to Cambodia. The quota for the country is 6,300 live pigs daily.

Having had a company banned, he said the number of live pigs imported to Cambodia is currently below 5,000 a day but the local supply is also increasing.