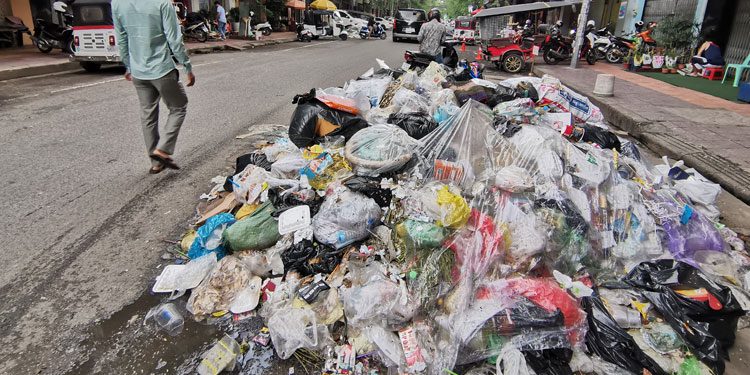 THE strike by Phnom Penh’s rubbish collectors this week has highlighted the ongoing delay of single-use plastic regulation, as the ministry says 510 tonnes of plastic waste continues to be discarded in the city every day.

This is despite the Ministry of Environment stating that an agreement to draft a sub-decree to prohibit the importation and production of single-use plastic products would be implemented in November last year.

Speaking to Khmer Times on the current progress of the draft sub-decree yesterday, Ministry of Environment spokesperson Neth Pheaktra said, a technical team is continuing to work on the matter. He  however, did not provide a set timeframe.

The sub-decree proposed the banning of imports and the production of single-use plastics such as straws, spoons and cups, with an added focus on coffee shops, food vendors and supermarkets, as well as individuals.

It was hoped that the ban would push local businesses to seek alternatives to plastic products creating an economic environment for affordable and large scale natural single-use production facilities.

“In Phnom Penh, approximately 3000 tonnes of waste is produced every day. According to the Ministry of Environment data, 17 percent or 510 tonnes of this is plastic,” Pheaktra said.

“Also, we have noticed an increase in single-use plastics during the COVID 19 pandemic as there are more ordering of foods and packaging with plastics, as people didn’t go out,” he added.

Anti-plastic campaigner and owner of ElvenOneKitchen in Phnom Penh, Soklim Srun, said that she understood many businesses required effective single-use items but there were many alternatives to plastic.

“During the COVID-19 pandemic, much more plastic is being consumed, especially in the restaurant and food industry, as customer’s trends have moved towards taking away and delivery,” she said.

UN Development Programme (UNDP) Resident Representative, Nick Beresford said, “We would certainly like to see the government move in the direction of more anti-plastic regulation, and we are seeing positive signs.

“The UNDP and the Government of Sweden have supported the Ministry of Environment in developing new regulations on a selected set of single-use plastic items. Details of these regulations are currently under review by the government,” he said.

“The COVID-19 pandemic led to a surge in the use of single-use plastic items. These include disposal masks and gloves, and single-use plastic packaging for food delivery. Disposable face masks, and other protective items have become a major new source of marine plastic pollution,” he added.

According to an Environment Ministry report, the three main cities in the Kingdom which produce the most amount of waste are Phnom Penh, Sihanoukville and Siem Reap.

The report noted that the amount of waste produced in the Kingdom is more than 10,000 tonnes per day.