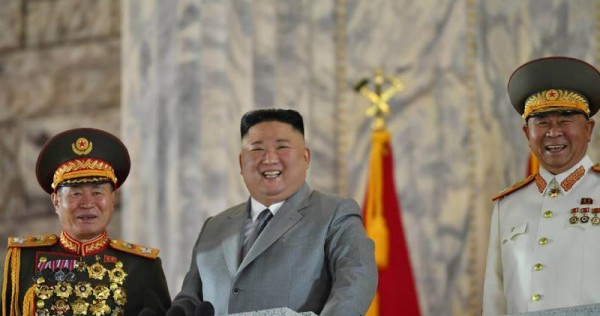 SEOUL – North Korean leader Kim Jong Un watched tens of thousands of dancers, gymnasts and other performers in a large-scale celebration on Sunday (Oct 11) of the 75th anniversary of the founding of the ruling Workers’ Party.

The party’s newspaper, Rodong Sinmun, on Monday published a photograph of Mr Kim, flanked by top aides at a long banqueting table, waving to the audience.

State broadcaster KCNA said Mr Kim was greeted by loud cheers as he made his entrance on Sunday for the “Grand Mass Gymnastics and Artistic Performance, ‘Great Guidance’.”

The event came a day after an unprecedented nighttime military parade, which showcased an unusually broad array of the country’s new weapons.

North Korea revived the so-called Mass Games in 2018, following a five-year hiatus, to sell an image of international engagement and peace while raising much needed foreign currency.

Despite the name, the Mass Games are large performances involving tens of thousands of dancers, gymnasts, martial artists and singers acting out familiar propaganda themes.

The North Korea national flag and the Workers’ Party flag were hoisted to musical numbers on Sunday including “The Workers’ Party Is Our Guide” and “Along the Road of Socialism”, KCNA reported.

The games are usually a major draw for tourists, most of them from China, but rights groups say the inclusion of thousands of child performers is tantamount to forced child labour, and testimony collected by defector groups describes harsh training regimes.

The games went ahead this year despite strict border controls and quarantine measures imposed to prevent an outbreak of the coronavirus.

Analysts say that would be devastating for the economically and politically isolated country, which is yet to report any confirmed cases of Covid-19.

Mr Kim and his official entourage were not wearing masks in the Rodong Sinmun photograph of Sunday’s event, in contrast to the crowds of suited spectators in the large stadium behind them.

Trump declares himself immune from Covid-19, prepares for return to campaign trail