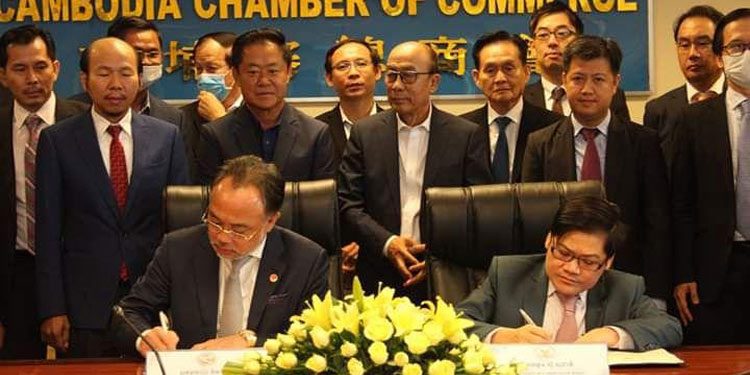 Cambodia Chamber of Commerce (CCC) and Securities and Exchange Commission of Cambodia (SECC) – the country’s securities regulator – signed a memorandum of understanding (MoU) in a move to team up concerning raising awareness, while encouraging firms to join the local stock market.

The MoU was signed between CCC’s president Kith Meng and SECC’s Chairman Sou Socheat. They said this partnership was created to promote and raising awareness of the securities market for commercial enterprises to get access to capital market financing as well as attracting investment from the local private sector.

This is more than just about raising awareness in the sector, but the CCC’s members will consider the capital market as their channel to mobilise funds to financially support their business operations.

Jong Weon Ha, COO at Cambodia Securities Exchange, told Khmer Times yesterday that the move has reflected that there are many companies in the country becoming more interested in raising funds through the capital markets and also in trading participation.

“I think having only one source of funding is too risky for business owners. Therefore, source-diversification is necessarily needed,” he said, adding that the best alternative source is the capital market where there is the long-term funding source that business owners are able to use for expansion, especially in the COVID-19 situation.

To keep the market growing, Ha said the regulator and Cambodia Securuties Exchange (CSX) continue to discuss and work together to promote and raise awareness of this campaign among people.

He affirmed that the CSX has created a listing incubator team, with an aim to freely provide consultation and training concerning listing matters such as listing preparation, processes, procedures and requirements.

“Meanwhile the CSX has been providing free monthly training seminars to raise public understanding about the Cambodia securities market and securities investment,” he noted.

The Capital Market saw a 22 per cent drop in capitalisation in the first quarter of the year, bringing the market capitalisation to around $544million, compared with the fourth quarter of 2019, according a latest report from the SECC.

The amount of purchasing orders had increased to 65 per cent but the amount of sales orders had dropped by about 17 percent in Q1 this year compared with Q4 2019. In addition, the number of investors to place buy orders and sales was at 634, up 20 per cent in Q1.

The investors who place the buy and sales orders are mostly Cambodians, representing 71 per cent, Japanese investors were at 14 per cent and Chinese investors at 9 per cent while the remainder consisted of other investors. So far there are 11 securities-listed companies, of which five are share-based and six are bond-listed, with a combined fund raising of about $223 million from the capital market.

Ha said the CSX is expected to have six more companies to list equities and another three to list bonds, which yield interest rates that are better than nothing.”