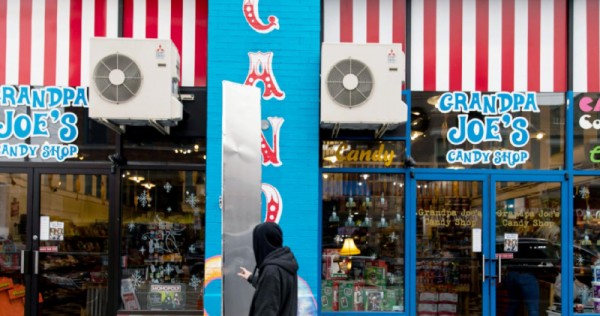 PITTSBURGH – Since mid-November, shining metal monoliths have suddenly appeared – and then vanished – in the strangest locations, from the Utah desert to a Romanian mountainside.

Now one has popped up outside a Pittsburgh candy store.

Capitalising on the intrigue surrounding the other monoliths and hoping to provide a distraction from the daily drumbeat of Covid-19 news, the owner of Grandpa Joe’s Candy Shop, Christopher Beers, commissioned a 10-foot tall, 24-inch wide triangle of plywood covered in sheet metal.

“There is a mystery behind it,” said Beers, even though he stripped the whodunit angle from his monolith, which he freely admits was designed to drive up candy sales.

Beers said he was captivated by sculptures that made headlines starting in November, the first appearing in Utah’s Red Rock Country, vaguely resembling the so-called monoliths in Stanley Kubrick’s 1968 film 2001: A Space Odyssey.

He enlisted a colleague to erect a similar enigma outside his store. One Facebook post was all it took to generate a media buzz around the “mysterious” metallic creation.

“Hopefully, it’s a reminder to support small, local businesses that have been so badly hit” by Covid-19, said Beers, owner of the independent chain of 10 candy stores in Pennsylvania and Ohio.

ALSO READ: Monolith or just trash? Metal sculpture in Utah appears to have been demolished

“And isn’t it fun to have something to talk about beside the pandemic?!”

Since the monolith went up, business has been brisk at Grandpa Joe’s. Customers eagerly take selfies with the monolith before heading inside to load up on Christmas sweets. The Facebook post is also driving candy sales online.

“Come see the Monolith before it mysteriously disappears,” said a post on a Facebook page for Grandpa Joe’s.

“Is it made out of chocolate?” commented one hopeful fan on the page.