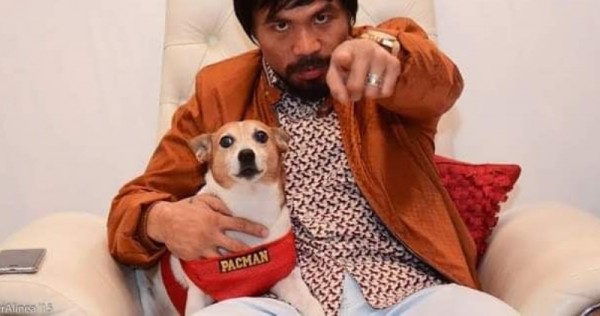 World boxing champion Manny Pacquiao buried his beloved 14-year-old pet Jack Russell Terrier, Pacman, in the grounds of his sprawling General Santos City home on Sunday after the dog was fatally injured in a freak accident.

A long-term member of Pacquiao’s entourage, David Sisson, was reversing a vehicle out of Pacquiao’s property when the dog reportedly shot out and was injured underneath the car.

“I didn’t even see him,” a heartbroken Sisson told Filipino media.

“The boss’ bodyguards said he came out of nowhere and it was too late.”

“Official mascot” Pacman, who was often pictured running alongside Pacquiao as he prepared for fights, was immediately taken to a vet who was unable to save the dog.

“If he was, like, seven years [old], he could have made it, according to the vet,” Sisson said.

“[Pacquiao and his wife Jinkee] understood and accepted what happened. It was a freak accident,” he added.

Pacman had accompanied the eight-weight world champion since 2006 during fight camps across the world.