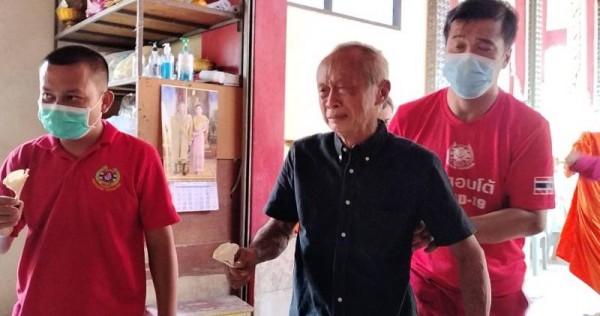 For 21 years, this Thai man has been hiding a morbid secret — keeping his wife’s dead body inside a coffin in his home.

Throughout that period, this devoted husband slept beside the coffin where her body was kept, talking to her as if she was still alive.

Charn Janwatchakal, 72, said he kept her body around simply because he loves her very much.

And that he could not bear to be separated from his soulmate, reported Thai publication The Nation earlier this week.

His wife had died in 2001 from a brain aneurysm, reported Thaiger.

During the day, Charn would be with his cats and dogs in a small space beside the house but at night, he’d sleep beside his wife’s coffin.

He used to live in this house with his wife and two sons. But after she died and he decided to keep her body, the two sons moved out as they could not accept his decision.

It is unknown how her body had been stored all those years.

However, after more than 20 years, this man finally decided it was time to let go and cremate his late wife.

And all for a very practical reason — he was worried that he would die before his wife could receive a proper funeral procession.

On April 30, the Phet Kasem Bangkok Foundation posted on Facebook that Charn had reached out to the organisation seeking help with regards to cremation for his wife.

As staff from the foundation removed her body from his home, Charn could be heard uttering “I still miss you every minute and my love for you has not changed.”

On the day of the funeral, Charn was seen sobbing on Facebook Live as he bid his partner a final farewell.

“Mum,” he cried, “you are just going for a brief business and you’ll be back home again. It won’t be long, I promise.”

The cremated remains were placed in a white cloth and Charn brought it back home the following day.

A female staff from the foundation who had visited him every day over the last two months to give him food and drink said she thought Charn had lived alone in his house all this while.

Never once did he mention anything about his dead wife’s body at home.

The foundation had rescued him following a motorcycle accident.

Charn lives in a small one-floor house on an 8,390 sqft plot of land in Bangkok.

This sad story of Charn living with his dead wife had netizens calling him the “endless love man” or man with “eternal love”.

“Fight on, grandpa,” one netizen said.

Another added: “I do not think he can resign himself to fate yet. He still looks grief-stricken but he let her go for fear that no one would handle this situation if something happened to him.”

Thai lawyer Nitithorn Kaewto, who had spoken to Charn earlier this week, said that he is a well-educated man with multiple degrees to his name.

A graduate from the Faculty of Pharmacy at Chulalongkorn University, he became a medic in the Royal Thai Army while his wife was an official at the Public Health Ministry.

The man also has a law degree from Ramkhamhaeng Open University, said Nitithorn.

Phet Kasem Bangkok Foundation said they provided Charn with a new mattress, blanket and a pillow while Nitithorn said he bought the elderly man a bed and gypsum boards for building a new house.