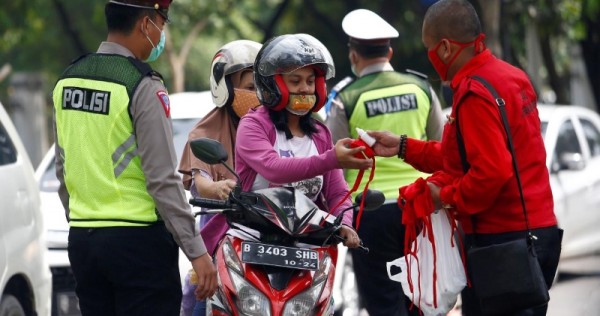 JAKARTA – With rising concerns that political campaigning in the lead-up to Indonesia’s regional elections could become super-spreader events for Covid-19, a senior government official has said that security authorities will crack down on campaign activities found to be in violation of social-distancing rules.

Coordinating Maritime Affairs and Investment Minister Luhut Pandjaitan, who is leading the government’s efforts to curb infection rates in nine provinces hardest-hit by Covid-19, said that the National Police, with the help of the Indonesian Military (TNI), could take measures to break up political campaigning and arrest participants who failed to maintain social distancing.

“I have told the National Police chief and head of regional police forces to crack down on (mass gatherings). I don’t want to see an event like the one in Magelang (Central Java) initiated by Gatot and Kami (Indonesian Students Action Union). That could have an impact… that could kill people,” Mr Luhut said in an interview shortly before chairing a coordination meeting with the governors of the nine provinces hardest-hit by Covid-19 on Tuesday (Sept 22).

He was referring to an event attended by former TNI chief Gatot Nurmantyo, organised by a group of President Joko “Jokowi” Widodo’s critics, which took place over the weekend.

Mr Luhut has been a proponent of a proposal that the President could issue a regulation in lieu of law (Perppu) that would allow for the postponement of the regional elections later this year.

However, the administration of President Jokowi and the House of Representatives have insisted on holding the 2020 simultaneous regional elections on Dec 9 despite the soaring number of Covid-19 cases in the country.

During a hearing at House Commission II overseeing home affairs on Monday, the government and legislators agreed not to postpone the elections on the grounds that the outbreak is still under control.

To prevent the spread of Covid-19 during political campaigning and balloting, the House only urged the General Elections Commission (KPU) to tighten social distancing rules and health measures, which will apply from the campaigning period starting on Sept 26 until polling day.

Election observers have blasted the decision to go ahead with the regional elections given that in the past few weeks, the country has seen a spike in the number of Covid-19 infections.

The number of confirmed cases in Indonesia reached 252,293 people on Tuesday.

The previous day the daily number of new cases in the country hit a record high of 4,176.

The decision to press ahead with holding the regional elections has been made despite the ever greater number of poll officials who have contracted the coronavirus.

Over the past three weeks, several central and regional KPU officials have tested positive for Covid-19, including KPU chairman Arief Budiman.

Meanwhile, on Sept 12, the KPU recorded that 63 out of 743 prospective candidates had tested positive for the disease, but this number had declined to 13 on Monday as most of them have now recovered.

“The government and the House are acting irrationally by neglecting public health and deciding to carry on with the elections,” said constitutional law expert at Andalas University in West Sumatra, Feri Amsari, during a virtual press conference on Tuesday.

“A regulation in lieu of the 2016 Regional Elections law (PERPPU) could allow the postponement of the elections if the outbreak still persists. Why doesn’t the government make that move?”

Co-founder of the Network for Democracy and Electoral Integrity (Netgrit) and former KPU commissioner Hadar Nafis Gumay also called on the government to postpone the elections, if for no other reason than what happened during the candidate registration period from Sept 4 to Sept 6.

At that time, the Election Supervisory Agency (Bawaslu) found that 243 prospective candidates had ignored social-distancing rules by bringing large entourages to register their candidacies at their local KPU headquarters.

Epidemiologists said that such political gatherings could become super-spreader events that could lead to a spike in the number of cases.

Mr Hadar said that since most political candidates were oblivious to the possible dangers of Covid-19 they could be expected to commit the same violations during the announcement of election candidates on Sept 23 and the drawing of their candidacy numbers the following day.

“Those situations should be perceived as solid arguments for the government to postpone the elections. We don’t want the polls to be postponed until the outbreak ends. We only want the elections to be delayed until a time when the KPU and the government can come up with new election mechanisms that minimise the chance of face-to-face interactions,” he said.

Political parties have differing views on postponing the local elections. Mr Mardani Ali Sera, a lawmaker on House Commission II from the Prosperous Justice Party (PKS), said the government should heed the call for the postponement of the elections.

Meanwhile, Indonesian Democratic Party of Struggle (PDI-P) secretary-general Hasto Kristiyanto said the polls should take place as scheduled given that there was no timeline as to when the pandemic would end.

The party is currently backing 256 prospective candidates in this year’s elections, including President Jokowi’s son Gibran Rakabuming Raka who is running for mayor of Surakarta in Central Java.

Coordinating Political, Legal and Security Affairs Minister Mahfud MD said the government had been firm in its decision to hold the polls in December and pledged that it would prioritise public health by imposing strict social-distancing measures.

Mr Mahfud also said that he had held a meeting on Tuesday with election organising bodies, law enforcement agencies and representatives of political parties, all of which were committed to adhering to strict social-distancing protocols.

Raid uncovers over 300,000 used condoms recycled for sale in Vietnam