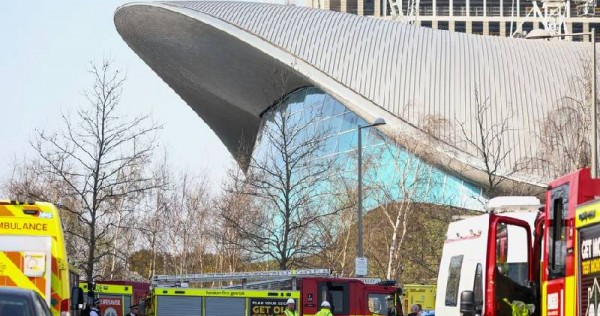 LONDON – A number of casualties with breathing difficulties were being treated by London’s ambulance service on Wednesday (March 23) after a leak of a high quantity of chlorine gas at the Queen Elizabeth Olympic Park’s aquatics centre, emergency services said.

The London Fire Brigade said that around 200 people had been evacuated after it was called at around 0945 GMT (5.45pm Singapore time) to the east London park, which hosted Summer Olympics events ten years ago.

“Due to a chemical reaction a high quantity of chlorine gas was released. London Ambulance Service are treating a number of patients,” London Fire Brigade said in a statement. “While we ventilate the premises we would ask those residents in the immediate vicinity to close doors and windows.”

The London Legacy Development Corporation (LLDC), which manages the park, said the incident happened at around 1000 GMT and the immediate area had been cordoned off and evacuated.

“There was an incident at the London Aquatics Centre… involving the release of a gas,” a LLDC spokesperson said.

“We are working closely with emergency services who are on site. We understand there are a number of casualties with breathing difficulties who are being treated by the London Ambulance Service.”

The London Ambulance service said it was responding to a major incident at the aquatics centre and had sent multiple resources to the scene.

Pictures on Twitter showed more than a dozen ambulances outside the swimming pool.

The Metropolitan Police said the incident involved a leak of noxious fumes.

Russia’s war in Ukraine: Latest developments and what you need to know almost a month into Putin’s invasion

Amid pressure, Nestle suspends brands in Russia, including KitKat, Nesquik