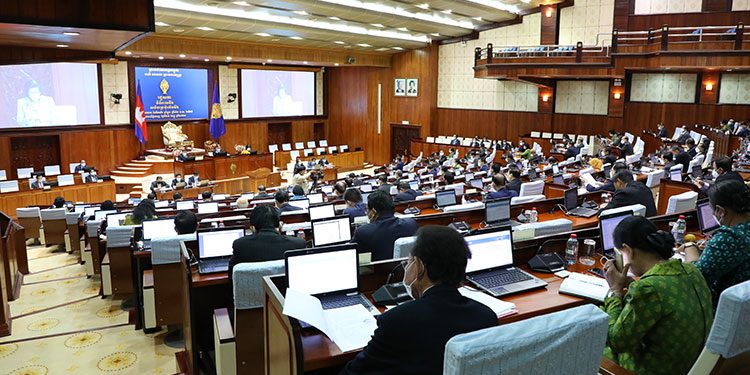 The National Assembly of Cambodia on Wednesday ratified the bilateral free trade agreement between Cambodia and South Korea.

One hundred lawmakers, who were present during the parliamentary session, unanimously adopted the pact, which will be next reviewed by the Senate before being submitted to King Norodom Sihamoni for endorsement.

The trade deal was signed in October by Cambodian Minister of Commerce Pan Sorasak and South Korean Minister of Trade, Industry and Energy Yeo Han-koo via video link.

Under the deal, initially agreed in February, Cambodia will lift tariffs on 93.8 percent of products and South Korea will remove them on 95.6 percent of imports from the Kingdom.

The Commerce Ministry said the FTA will create a wider market for Cambodia’s products.

It said the agreement will enter into force 60 days after both sides inform each other of the completion of internal ratification procedures.

Sorasak said that the FTA will boost bilateral trade and undergird economic partnerships between the two nations.

“The Cambodia-Korea Free Trade Agreement will create additional opportunities for businesses to grow and improve people’s welfare in both countries and ensure a faster recovery from the economic recession caused by Covid-19,” he said.

The two-way trade between Cambodia and South Korea was valued at $798 million in the first eleven months of this year, a year-on-year decrease of 15 percent.

Figures from Korea International Trade Association (KITA) showed that from January to November 2020, Cambodia exported $291 million worth of products to South Korea, down 4.9 percent compared to the same period last year.

Meanwhile, Cambodia imported $507 million worth of goods from South Korea, a 20 percent decrease.

This is Cambodia’s second FTA, after the Kingdom ratified a deal with China in September.

The two governments agreed that the pact will be put into effect after 60 days after the ratification.