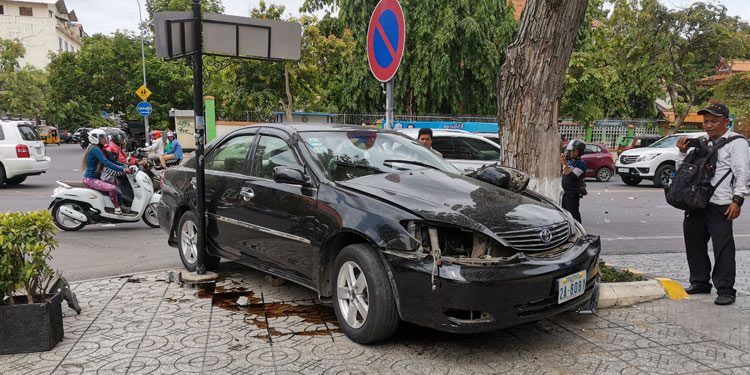 The National Road Safety Committee (NRSC) announced its newly implemented sub-decree enforcing stricter road rules has already resulted in the reduction of both deaths and injuries on local roads.

The first 26 days of May recorded 98 fatalities and 253 injuries, down from 105 deaths and 414 injuries, compared with the same period last year, according to Deputy Prime Minister and head of the NRSC Sar Kheng.

Kheng had previously announced that the government has declared 2020 a “watershed year” in the fight against road accidents.

However, while the new traffic laws are pushing the road toll slightly down, the still-high numbers of dead and maimed have highlighted the considerable economic effect road trauma continues to have on the Cambodian economy.

It is estimated that in 2013 the economic cost of road crashes equalled 2.3 percentof the gross domestic product of Cambodia, approximately $337 million – representing more than $550 million today.

This financial sentiment was captured by Kheng, who, after being asked if this recent crackdown on road users was to raise revenue, reportedly said, “Increasing fines and enforcing the law is not meant to raise money; it is meant to save money.”

His economic view has been backed by the Asian Development Banks (ADB) 2019 report, “Road crashes cause suffering, fear and trauma to victims and their families and impose a heavy burden on the national economy.”

In response, the development bank has flagged improved road safety infrastructure, in conjunction with law enforcement, would be required to considerably reduce local road trauma.

“Although Cambodia’s road transport fatality rate has decreased, it remains high. Road safety is critical considering the rapid increase in and dominance of motorcycles, the ADB said.

“Furthermore, road maintenance tends to be underfunded. Early repair of road damage, such as cracks and potholes, is necessary to maintain the life of the pavement. Controlling overloading remains a major issue in maintaining reasonable road maintenance costs,” the ADB added.

The new legislation fines motorcyclists, car and heavy truck drivers. Registering an alcohol level ranging from 0.25 to 0.39 units of pure alcohol will result in a fine of $62.50 up to $200. Motorists whose alcohol levels range from 0.40 to 0.80 will have to pay from $250 to $1,000. Fines for motorists driving cars and heavy truck without licences, revoked licences and or no number plates are set at $300 and $600, respectively. The window of payment for the fines will also be reduced from 30 to 15 days. Payments made after the deadline will be increased.

Traffic police officers are authorised to file a complaint to the court should traffic offenders fail to pay their fines within 60 days. Previously it was 90 days.

According to official government figures, the number of road fatalities in Cambodia rose to 1,981 last year, an increase of 12.5 percent from 2018. Injuries also increased to 6,141 last year, up 29 percent compared with 2018, annually representing more than 12 deaths per 100,000 or in excess of five deaths every day.

Cambodia Local tourists is not enough to restore the sector