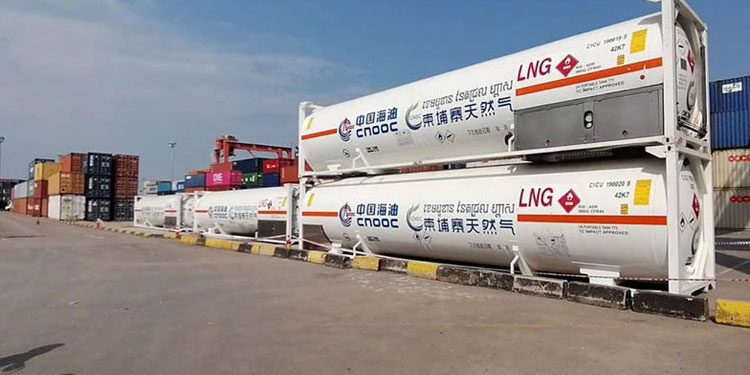 A senior official from the Ministry of Mines and Energy has confirmed that a timeframe for the feasibility study on the establishing a liquefied natural gas (LNG) receiving terminal, LNG pipeline, re-gasification plant and trucking network from the Cambodian Natural Gas Co Ltd (CNGC) has been delayed because of COVID-19.

CNGC was granted the licence  for Cambodia’s gas supply chain. In January this year, CNGC and Chinese firm CNOOC Gas Power Group Co Ltd teamed up to import LNG to distribute within Cambodia’s market.  The cooperation was set up to import the fuel to supply demand in the local market. The company was to focus on hotels and restaurants at first then expand to 25 provincial cities. Currently it is focusing on Phnom Penh and Preah Sihanouk province.

LNG would be new to the Cambodian market, so the CNGC has to study and develop the market for the product, said Cheap Sour, the director-general of the General Department of Petroleum at the Ministry of Mines and Energy (MME).

He said that CNGC in January had requested the ministry to import specialised tanks known as ISOs for LNG to develop the market in Cambodia. Sour added that the LNG pipeline and LNG receiving terminal are part of the plan.

Sour added that CNGC’s first phase was to import five of the tanks they had bought to develop the market, while, the company is doing the feasibility study to establish the pipeline and LNG receiving terminal. After the study is completed on the LNG infrastructure, it will consider purchasing LNG from a cheap source to supply the Kingdom.

Sour said: “The feasibility study is included in the licence for when the company is going to complete the study, when it will recruit contractors and when construction will start, but the timeframe of the feasibility study has been changed because of COVID-19.”

He added that the LNG needs a big investment. The LNG receiving terminal costs more than $1 billion. The re-gasification plant and pipeline are also expensive.

“Now they are studying how to build the LNG receiving terminal and LNG pipeline and market development. LNG is mostly used in power plants, for industry, in commercial activities and for residential use,” Sour added. It is considered a clean energy source.

LNG is a natural gas that has been cooled down to liquid form for ease and safety of non-pressurised storage or transport. It takes up about 1/600th the volume of natural gas in the gaseous state. It is odourless, colourless, non-toxic and non-corrosive.

CNGC has imported around 83 tonnes of the specialised tanks from Chinese firm CNOOC Gas Power Group Co Ltd. Each of the tanks weigh around 16 tonnes. They arrived at Sihanoukville Port on a container ship in mid-January, but there have been no further deliveries since, according to an S&P Global report.

S&P reported that CNGC, the country’s primary gas company, has a 15-year plan up to 2034 – split into three phases of five years each – to build an LNG receiving terminal, 27 urban supply stations, an LNG trucking fleet and 2,825 kilometres of pipelines to supply 25 provinces and cities. In April, CNGC said the pandemic had disrupted its plans to bring in senior technical personnel for the project.

“We expect LNG imports to slow significantly on the back of the Coronavirus pandemic, which would result in CNGC falling short of its original target of 0.1 million tonnes a year LNG ISO tank imports in 2020,” said Shi Yun Fan, a research analyst for gas, power and energy futures at IHS Markit was quoted by S&P Global.

She said the pandemic appears to have also disrupted progress on CNGC’s Phase I plan and, consequently, the build-out of pipelines into inland cities such as Phnom Penh from their jetty in Bay of Sihanoukville is likely to be delayed.

MME’s Director-General Sour said that, mostly, the demand for LNG is from power plants. LNG is also used for households and cars. However, it is mostly used in large power plants and other big projects.

“We cannot make any assessment on the readiness of this project because they need the technical personnel to come to conduct surveys. Building the LNG receiving terminal needs at least three years, but when they will start, we do not know,” Sour said.