Cambodia has called for an increase in investment from Russia 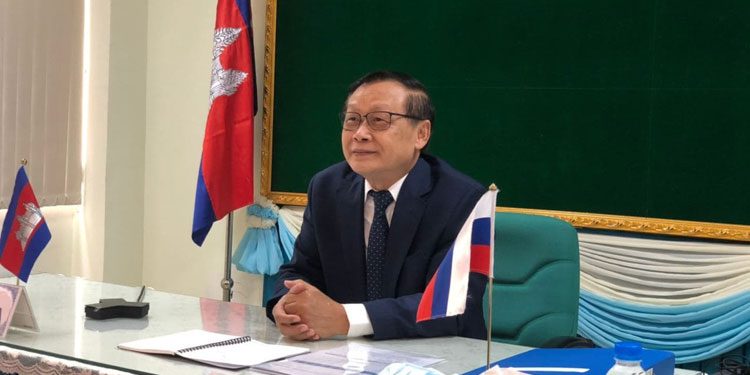 Cambodia has called for an increase in investment from Russia, particularly in the light and medium machinery sector, according to a senior official at the Ministry of Commerce.

Sok Sopheak, secretary of state of Ministry of Commerce, said during a meeting with Russian Ambassador to Cambodia Anatoly Borovik, conducted via video conference on Tuesday, that both Cambodia and Russia vowed to strengthen mutual cooperation on trade and investment in light of the continuing impact of COVID-19.

Sopheak noted the pandemic has brought about an 18 percent contraction in the level of bilateral trade between Cambodia and Russia during the first 10 months of the year compared with the same period last year.

“Cambodia’s exports to Russia are mainly garments, footwear and travelling goods. However, the [demand for these products has] dropped since [shopping centres] in Russia are shut down [with] only food courts open,” Sopheak added.

“We also postponed a [scheduled] meeting with private sector [interests] between Cambodia and Russia because of the pandemic. However, post-pandemic, the discussion will resume between [our nations] to [promote] bilateral trade,” he added.

According to statistics from the Ministry of Commerce, measured from January to October in 2020, Cambodia exported goods worth over $38.75 million to Russia, down 4.8 percent from the same period last year. Imports of goods from Russia, however, increased in this period to $6.4 million, up from $2.5 million measured year to date for the same period in 2019, an increase of more than 155 percent.

Sopheak noted that on Nov 15, Cambodia and the Asean countries joined with South Korea, China, Japan, New Zealand, and Australia to sign the Regional Comprehensive Economic Partnership agreement. This came on the heels of Cambodia and China having signed their free trade agreement (FTA) on Oct 12. With this [in mind], he said investment from Russia, especially in the light and medium machinery sub-sector, would strengthen the industrial sector of the country and help bolster the Kingdom’s export competitiveness.

“Cambodia [has indicated our] intention to study the possibility of establishing a free trade agreement with Russia as soon as possible,” Sopheak added.

He called on Russian businessmen and investors to join the future business forum hosted by the Russian Chamber of Commerce and Industry to gain more information regarding business opportunities in Cambodia, and also asked Russia to facilitate getting the Russian developed COVID-19 vaccine to Cambodia in the future.

In response, Russian Ambassador to Cambodia Anatoly Borovik said he will accept those requests and send them to Russia’s government, getting back to Cambodia with responses in the near future.