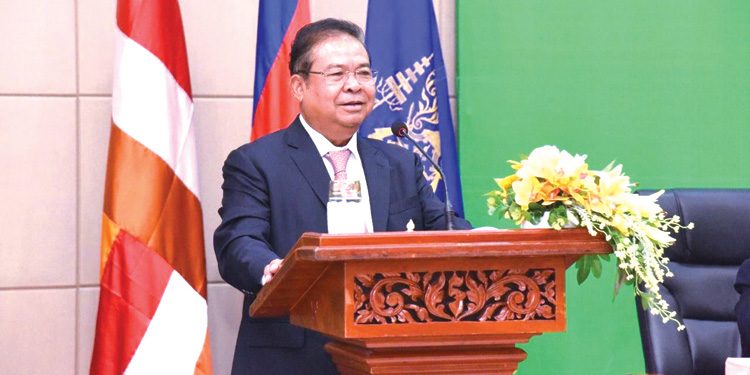 The National Bank of Cambodia (NBC) says the banking sector will continue to grow confidently and actively contribute to economic activity.

The number of headquarters and branches of banks and financial institutions nationwide reached 2,465, with 3,081 ATMs.

On top of that, outstanding loans in microfinance reached $7.3 billion, up 15.1 percent with 2.1 million accounts in the first six months of the year. The outstanding deposits from customers was $3.8 billion. Lending by microfinance institutions broke down roughly as such: family groups 36.4 percent, agriculture 18.3 percent, services 14.8 percent, transport 6 percent, construction 3.7 percent, commerce 18.3 percent and others 2.5 percent.

NBC’s Governor Chea Chanto, at the semi-annual conference of the National Bank of Cambodia, said that the Kingdom’s macroeconomics remain positive with a low inflation rate, stable exchange rate and a surplus in the balance of payments to be contributed from high international reserves. In addition to that the banking sector showed solid growth which could contribute to providing liquidity to the economy while deposits and credit continued to grow, although the economy still faced uncertainty.

“In the banking sector, the main risks are the prolonging of COVID-19 and a fall in  people’s income and business, which would decrease deposit and credit growth,  increase loan rescheduling, cause a drop in the construction and real estate sector, and a slowdown of the inflow of capital from foreign countries to the Kingdom’s banking sector,” Chanto said.

Sok Voeun, chief executive officer of LOLC Microfinance, said his institution saw a positive performance in the first half of the year with loans growing 5 percent, deposits dramatically increasing and non-performance loans at just less than 1 percent. “In the next six months, we believe the financial sector will be better because the COVID-19 situation, business and people’s conditions are improving day by day,” he added.

The Kingdom’s trade balance is expected to be in surplus  to the tune of $130million because the inflow of financial accounts may still offset the growing current account deficit, caused by the decline of income from tourism and foreign workers’ remittances, according to the NBC report.

International reserves remain high ($19billion), which guarantees the import of goods and services for the next 10 months. It is higher than the maximum level for developing countries which average a three-month guarantee. The NBC said that the inflation rate is 2.5 percent because of falling commodity prices and fuel-related services, which have reduced the pressure on rising food prices. At the same time, the exchange rate of the riel against the US dollar has increased slightly.

The interest rate of Negotiable Certificates of Deposits (NCDs) and Liquidity-Providing Collateralised Operations (LPCOs) have also been reduced since March in order to increase liquidity in the banking system and reduce the cost of loans in riels, according to the NBC.

NBC’s NCD issuance in riels increased by 27.2 percent (5.1 trillion riels) and US dollars increased by 11.8 percent ($13.4 billion). LPCO operations were conducted 12 times, the successful bidding volume increased by 56.4 percent (2.8 trillion riels). The NBC said that because risks to
the economy have increased, risk-monitoring for the banking sector has also been steadily strengthened in addition to risk-based supervision and awareness of future prospects.