Call for new 7-Eleven to stock half Cambodian-made products 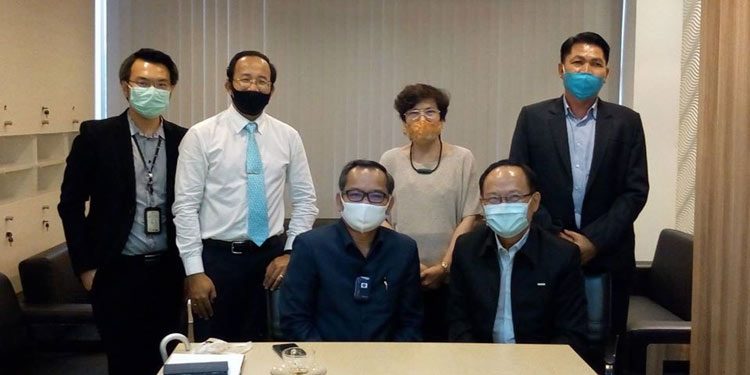 It’s hoped 50 percent of Cambodian-made products will be on sale at new 7-Eleven stores, a universally well-known convenience store, when it opens in Cambodia next year.

The plan was disclosed during a meeting between the Cambodia Ambassador to Thailand Ouk Sorphorn and Chairoj Tiwatmuncharoen, senior vice-president of operations at CP All Public Co Ltd when they both discussed how the store would operate in Cambodia.

Ambassador Sorphorn applauded the company that has recently granted the master franchise to operate the brand store in Cambodia.

“We would like the company to follow the promise that we requested to see as many as workers as possible to be employed, with 50 percent of Cambodian products to be on sale at the store when it begins operating in Cambodia,” he was quoted as saying.

Chairoj, in response, expressed the company’s commitment to put in place the request, while asking the Cambodia side to provide information about the local products, especially food processing and dried food, which according to him, will include in the product lists in its first branch.

The first branch is planning to open later this year at an unspecified location, he noted.

Heng Sovannarith, commercial attache in the Kingdom of Thailand said yesterday that processed and dried foods accounted for the major products to be sold at their first store.

Sovannarith, who also accompanied the Ambassador to the meeting, said the company wants to employ more Cambodian staff and sell more local products, which he said would save logistical costs.

“Of course, it is a good opportunity for our local SMEs, but it is concerned that they are not ready for competition with imported products. Thai SME production is very strong in terms of product branding and packaging,” he said.

CP All entered into a master franchise agreement with the Japanese-American owned 7-Eleven Inc last week.

CP All already operates all 7-Eleven stores in Thailand, since opening its first store in 1989 and the company has so far operated close to 12,000 stores in the country, second only to Japan in the world.

7-Eleven Inc is the premier name and largest chain in the convenience-retailing industry. Based in Irving, Texas, 7-Eleven operates franchises and licences more than 70,000 stores worldwide, including 11,800 in North America. Cambodia will be the 19th country where 7 Eleven stores will operate.

CP ALL has done a tremendous job growing the 7 Eleven brand in Thailand, and I can think of no one better to bring our brand of convenience to consumers in Cambodia,” said 7 Eleven Inc President and CEO Joe DePinto.

“This relationship also promises to bring additional jobs and economic opportunities throughout Cambodia,” he added.

Mamy major regional players in the industry already exist in Cambodia, with Circle K entering in 2018 and now it operates more than 20 stores. TH CVS Co Ltd, part of Cambodia’s TH Group, owns the Circle K franchise in Cambodia. The company has set its 10-year plan for 300 stores in Cambodia. Other retailers include Aeon MaxValu Express with nine stores, Smile Mart and Lucky Express, and Kiwimart, which operate more than 20 stores in the market.

Aurelien Cadot, general manager of Arthemis Co Ltd, the parent company of Kiwimart Cambodia, said the number of supermarkets, minimarts, and convenience stores has increased rapidly in the local market.

“Cambodia is at the beginning of what is called a modern retail market,” he said.

For the 7-Elevent, it is reportedly told that it is planning to open up to 1,000 outlets. Additionally, it will open the opportunity for local investors to run the store under CP ALL’s franchise agreement.