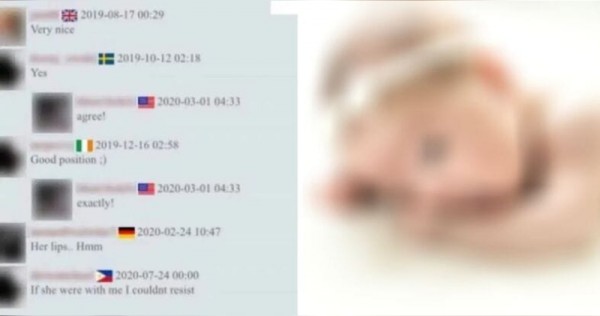 Keeping babies off social media can be difficult for some parents, especially when it’s through online networking platforms where they stay in touch with family and friends. While as for most of us, adding hashtags on our social media posts is just another thing that we do online.

However, for one mum, a seemingly harmless action got her horrified and losing sleep for weeks when she found out that her baby daughters pictures ended up on a child pornography website.

This is another sobering reminder for parents on keeping babies off social media and the dangers of posting their children’s photos online.

Stolen From A Public Profile

Just like most people on social media, Amanda Morgan was posting her then 6-month-old baby daughter’s pictures to share them with families and close friends. That all changed when she found out that the photos “fell into the wrong hands.”

From what she called “innocent” Facebook and Instagram pages, Amanda later learned that her daughter’s pictures were being used on websites featuring paedophile content. She learned this from fellow parents who were trying to get the site closed down.

“I cried uncontrollably for 45 minutes when I received that message. My partner couldn’t calm me down; I was sobbing and shaking. I thought it was all my fault because I had this Instagram page,” said the 29-year-old mum. She also said there were three pictures of her child on the website. They were digitally enhanced and manipulated to look like her baby had make-up.

“I haven’t dolled her up like that, I wouldn’t want to put my baby in make-up,” Morgan added.

Determined to get her child’s pictures off the site, Amanda set up an account for the website to see which images were being used. She said the website had “child abuse images all over [it].”

“I’ve never seen anything like it,” the mother wrote. “I didn’t want to look too deep because I didn’t want to scar myself. Obviously, mine’s bad with the comments, but my baby’s fully dressed. These kids are getting abused and getting pictures taken of them by their own parents. I just feel so sick, and I feel sad for those babies.”

“As sickening as the comments were on [daughter’s pictures], they were mild. The other stuff that’s on there is even worse. I nearly threw up. I was literally retching like I was going to be sick. I’ve not been sleeping properly since I found out,” said Morgan.

According to Morgan, her first instinct was to blame herself for what happened, having been the person who posted her child’s pictures online.

“When I got this message I thought ‘I shouldn’t have put any pictures on’ but then I thought ‘why shouldn’t I?’ said Morgan.

“They make me happy; I love looking back on pictures from when she was little. I shouldn’t have that tarnished because of sickos in the world.” Morgan added.

But if there is anything Morgan learned from the experience, she said it’s to be careful of what we post online — and to think twice before posting pictures of children online.

“My child is covered, she’s wearing a long-sleeved jumper and a skirt in one of the pictures, and you can’t see any of her skin,” Morgan noted.

She also urged parents to make sure their children are “covered up in any pictures they share, never naked or in the bath.”

“If you want to take those pictures, just keep them to yourself, don’t put them anywhere for these creeps to get hold of,” she added.

You’ve probably heard about “sharenting.” It starts from the sonogram, their first teeth, then their grinning faces after making a mess with their first ice cream… the list, goes on.

Documenting every precious moment of their children’s lives has become part of thousands of parents’ routine. And understandably.

But because this seemingly harmless act is not always harmless, parents need to remember the three big no-nos for online safety and for keeping babies off social media:

Pictures of your child in a state of undress (fully or partially). These are what predators look for first. These photos do not belong online!
Something that may be cute and funny now, but can be embarrassing or humiliating in the future. You may think your child’s picture while potty training is all cute and innocent but when they are five or 10, would they find it the same you did? Think about what these pictures will make them feel when they see them in the future. Is this something they themselves would publicly share offline?
Not the details! Whether it’s the location of your house or the name of your child’s preschool showing in pictures of him wearing a uniform, this gives more information than you would want random strangers to know about. Avoid sharing identifying details to keep your kids safe.

These are not to say to don’t share anything at all or be off social media altogether. At the end of the day, sharing your baby’s pictures on social media is your choice. You just have to weigh the risks and benefits and ensure to be mindful whenever you do so.