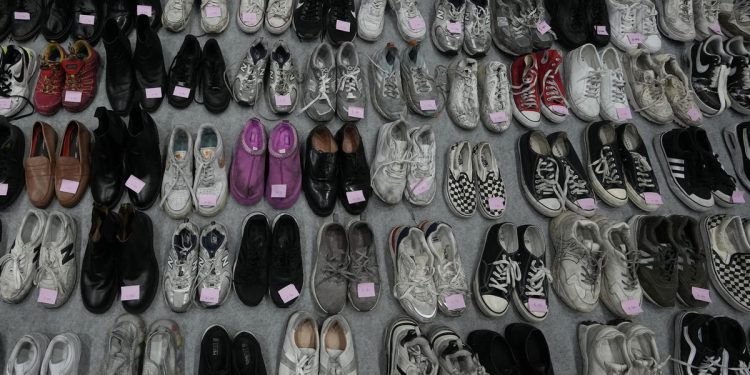 Days after more than 150 Halloween revelers died in South Korea’s deadliest crowd surge, a quiet but wrenching reminder of the disaster remained Tuesday: Hundreds of abandoned shoes have been laid out in neat rows in a badminton court in the capital Seoul.

Police have assembled the crumpled tennis shoes, loafers and Chuck Taylors – part of 1.5 tons of personal objects left by victims and survivors of the tragedy – in hopes that the owners, or their friends and family, will retrieve them.

The deadly crush in the nearby nightlife district Itaewon happened after tens of thousands gathered for Halloween celebrations Saturday evening. Part of the crowd got jammed in a narrow, downhill alley between a dense row of storefronts and the district’s landmark Hamilton Hotel. Partygoers were seen carrying out the wounded and dead, while dozens of lifeless bodies covered in blankets were laid out in rows on the nearby pavement.

Most of the victims were women and many of them were missing shoes, which experts say reflects the force of a crowd surge that stripped footwear from their feet in the crush.

Some 250 pairs of shoes at the gym are part of a huge collection of abandoned items found in Itaewon following the tragedy. There are also hundreds of pieces of clothing, including coats and movie character costumes, as well as handbags, smartphones, Bluetooth earpieces and a few passports, including at least one belonging to a U.S. citizen.

Yongsan police officials, who will keep the gym open for 24 hours until Sunday, didn’t immediately confirm how many of the items have been returned to their owners.

As of Tuesday afternoon, 156 people were confirmed dead and 151 were being treated for injuries, with 29 of them in critical condition.  South Korean officials admitted responsibility and apologized for failures in preventing and responding to the tragedy.

Lions returned to enclosure at Sydney Zoo after escaping

China has no time frame for Taiwan reunification, even if US says so: Envoy