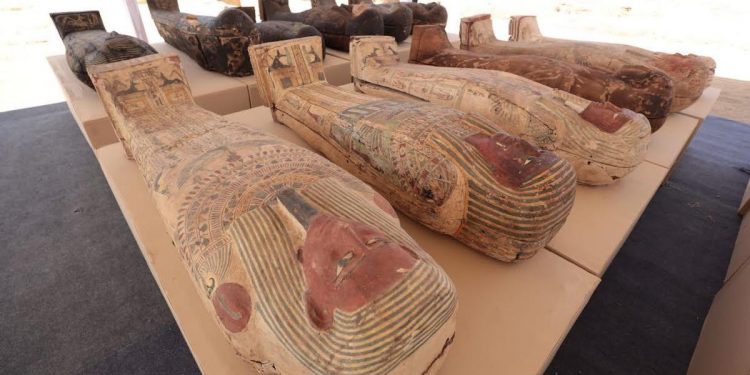 Cairo — Egyptian archaeologists’ have revealed another massive haul of priceless artifacts from the Saqqara Necropolis, a bountiful site near Cairo that likely still holds untold secrets. On display Monday were dozens of newly-discovered, beautifully decorated coffins or sarcophagi, still sealed up with their owners mummified inside, along with dozens of bronze statues. Monday’s big reveal, with artifacts lined up in front of Saqqara’s Step Pyramid of Djoser for journalists to admire, was the fifth by the archaeologists working at the site since 2018, and there are still many years of work left to carry out there.

The latest discoveries, including about 250 still-sealed sarcophagi, came from the “Cemetery of Sacred Animals” at Saqqara, Mostafa Waziri, secretary-general of Egypt’s Supreme Council of Antiquities, told CBS News. There have now been more than 450 decorated, sealed coffins containing mummies in good condition discovered at the cemetery, all of them dating back some 2,500 years.

The cemetery site at Saqqara was previously called “Bubasteion,” a reference to the ancient Egyptian goddess Bast, who was worshiped in the form of a cat. Many of the statues initially discovered there depicted the goddess. In 2019, however, the site was renamed the Cemetery of Sacred Animals after archaeologists discovered other mummified animals and statues of other Egyptian deities there, Dr. Mohamed Al Saidi, the mission’s director, told CBS News.The artifacts displayed on Monday included about 150 bronze statues of Egyptian deities of different sizes, including some portraying the gods Anubis, Osiris, Nefertem, Isis, and Hathor.

“Today’s discovery confirms that the temple wasn’t exclusively for cats, but for other Egyptian deities too,” Al Saidi told CBS News.

“We found two beautiful wooden statues with golden faces of the deities Isis and Neftis, named the protectors of the coffin,” he said of the artifacts pulled from one of the dig shafts at the cemetery. “They were in a seated position [by one coffin], one of them by the head of the coffin and the other by the feet, in a position called ‘the mourners’ or ‘weepers’ for the deceased.

“Inside the same coffin, the archaeologists discovered a papyrus roll they believe may be 10 yards long and contain chapters of the “Book of the Dead.” The papyrus has been sent to a lab at the Egyptian Museum for further examination.

The worksite is almost 440 yards long, and the archaeologists working there have only carried out excavations on the first 100 yards, so Al Saidi told CBS News the site likely still has a lot more treasures to reveal.

Egypt’s tourism industry is trying to get back on its feet after the shock of the COVID-19 pandemic, but the war in Ukraine has dealt a fresh blow. Russians and Ukrainians represented a significant proportion of the foreign tourists visiting the country before those calamities struck.

Unlikely monkeypox outbreak will lead to pandemic, WHO says