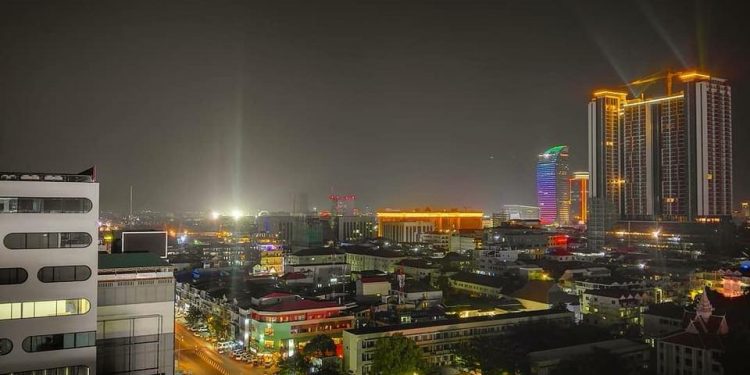 The US and EU are considering withdrawing economic privileges from Cambodia for the way elections were held last year. The ruling party won all parliamentary seats because the opposition had been crippled. Opposition leaders were disqualified and their party dissolved.

By western standards, Cambodia’s election fell far short of democratic norms and the result was unfair at best, illegitimate at worst. Strangely, however, there was no widespread protest. Instead, there was a palpable sense of relief among ordinary Cambodians when the elections were over.

Economically, the country has been growing steadily at an average of 7.7 % a year over the last twenty years making it one of the fastest growing economies in the world. The capital Phnom Penh, increasingly takes on the look of a modern Asian city with a growing number of five-star hotels, skyscrapers and fine restaurants.

What impresses is the lack of abject poverty that one sees too often in other third-world capital cities. Siem Reap, on the bank of the Tonle Sap, has prospered on international tourism to Angkor Wat, receiving millions of tourists every year. Sihanoukville, on the Gulf of Thailand, is booming with port facilities straining to move a growing number of containers stuffed with apparel, bicycles and other products for the global market. Chinese and Japanese investments are pouring in, seemingly in competition with each other.

I first visited Cambodia as Singapore’s Minister for Trade and Industry in 1999. On the road to Angkor Wat, my host, Cambodia Commerce Minister Cham Prasidh, pointed out the spot where Prime Minister Hun Sen narrowly survived a point blank rocket attack two weeks earlier. Cambodia at that time was not a safe country at all. Weapons were everywhere.

One Singapore female hotel HR manager was confronted by an aggrieved employee who held a grenade in his hand with the pin pulled out. It took her over an hour to persuade him to put the pin back in. Years later, I asked Prime Minister Hun Sen about the attempt on his life. He told me that he knew who had ordered it but did not retaliate because his overarching objective was to achieve peace.

Without political stability, Cambodia could not achieve economic development. Few countries went through the hell it did. In 1970, backed by the US, General Lon Nol led a coup against Prince Sihanouk whom the US felt was impeding its fight against Communism in Vietnam. Without Sihanouk’s balancing act, the country quickly dissolved into civil war.

Partly in thrall to a misguided ideological dream to re-create Cambodian society, and partly out of fear that a unified Vietnam would quickly press on Cambodia, the Khmer Rouge hurriedly evacuated Phnom Penh and embarked on a genocidal cleansing of society. That was Year Zero. There is no Minister, no official, no senior Army officer, no business leader, in fact, no middle – class Cambodian, who did not have family members and relatives tortured and killed during that period.

Till today, the US Government insists on the repayment of a $150m loan taken out by the Lon Nol Government to buy food and weapons before allowing the World Bank and IMF to lend money to the current Cambodian Government.

As a matter of principle, PM Hun Sen would rather forgo these loans than repay the US Government for a loan taken out by ‘traitors’ who destroyed the country and set it on a path to utter ruin. The US Government of course takes a very different view.

Despite the almost total decimation of its upper layers by the Khmer Rouge just a few decades ago. Cambodian society is healing remarkably. It is an unbelievable recovery like a tree once reduced to a stump and given up for dead now sprouting new shoots.

The reason is to be found in the deep roots of Khmer society. The Khmer empire had a long history going back to the first millennium. It was much larger than Cambodia today extending into present – day Thailand, Laos and Vietnam.

It was based on a complex system of water management in the flood plains of the Tonle Sap and Mekong Delta. Tonle Sap Lake is a large water body which expands when the Mekong, one of the great rivers of the world, is in flood and contracts during the drier months. Under conditions of peace, the land is abundant which enabled the rise of a great Khmer civilization.

The temples of Angkor Wat are well-known. What is less known is the discovery at Phnom Kulen, under forest and mud, of a city the size of Phnom Penh today. Satellite images show that Angkor had the biggest pre-industrial urban area in the world in the 11-13th century.

Khmer civilization gave to Thailand its high culture, a spectacular display of which was seen in May this year during the coronation of Vajiralongkorn when he carried an old Khmer sword as part of the royal regalia. In 13th century the Mongol Yuan Dynasty sent a high envoy by the name of Zhou Daguan to Angkor. There he stayed for 3 months and wrote a detailed account of its splendor.

It is this sense of historical greatness which explains the rebirth of Cambodia. Cambodian intellectuals who escaped the slaughter of Year Zero, becoming refugees in foreign lands, never forgot whom they were and made sure their children did not either. Some refused to take up foreign citizenship.

Many have since come home. Prince Sihanouk ‘ s son, Sihamoni, reluctantly left Paris where he was a happy dancer to return home as king and restore an ancient monarchy. Like many of his countrymen, King Sihamoni internalizes a profound sense of duty to his people.

Not surprisingly, French colonizers had great respect for Khmer civilization. In the Guimet Museum of Paris, Khmer civilization is held in awe. President Jacques Chirac was fascinated by its art and displayed a startling knowledge of it when he saw Khmer sculpture on display in Singapore at the time when I was Foreign Minister.

When Vietnamese divisions, with the support of the Soviet Union, crossed into Cambodia in 1978 to get rid of the Khmer Rouge regime, many thought, including Singapore PM Lee Kuan Yew, that a Soviet – backed Vietnam would become the new colonial master of Cambodia and the inheritor of French Indochina.

After 10 years, and under coordinated pressure from China, the US and ASEAN, Vietnam pulled out. Some years later, over competing claims to an old Khmer temple ( Preah Vihear ), Thailand and Cambodia came close to war in 2008.

Battle – hardened Khmer Rouge soldiers on the Cambodian side would have been a match for better Thai forces. Through the good offices of ASEAN, good sense prevailed and peace was maintained. In recent years, westerners worry that Cambodia is becoming too close to an economically-expanding China.

When Cambodia blocked the issue of a joint communique by ASEAN Foreign Ministers on the South China Sea in 2012 and 2016, many felt that the decision was taken to please China.

While it is in Cambodia ‘ s interest to have good relations with China and to encourage Chinese investment in infrastructure and manufacturing, the Cambodian people would never allow Cambodia to be turned into a Chinese surrogate any more than it allowed any other regional or international power to be its master.

The US is naturally worried that the new port and airport development in Sihanoukville financed by China will be turned into Chinese military bases. By welcoming US physical inspection of the sites, the Cambodian Government shows that it has nothing to hide.

When the Mekong was a dividing line between two worlds during the Cold War, Cambodia was an arena fought over by the big powers. As the terrain is mostly flat all the way from Ho Chi Minh City to Bangkok, whoever controlled Cambodia immediately threatened its neighbors. It became a killing field during the genocidal regime (for many years).

With peace and the expansion of ASEAN to include all of Indochina, Cambodia’s economy is benefitting from the growth of tourism, manufacturing and agriculture. The country is also becoming a logistics hub, connecting Vietnam to Thailand, and Laos to the sea. No country in ASEAN wants Southeast Asia to be Balkanized again, least of all, Cambodia).

Against this historical backdrop, it would be a mistake for the US and Europe to take harsh measures against Cambodia. Together with other major powers, the US and Europe contributed to the downward spiral which led to Year Zero. Since then, the US and Europe have rendered significant political and economic assistance which made possible the Cambodia we see today.

US assistance under GSP (General System of Preferences) and EU assistance under EBA (Everything but Arms) will eventually be phased out as Cambodia becomes a lower middle income country. For these programs to be terminated prematurely would harm Cambodia and cause the US and Europe to lose goodwill needlessly.

While the US and the EU have every right to express its views on political and economic developments in Cambodia, it should not judge the country on the basis of a few snapshots taken in recent years but instead take a wider view of what Cambodia was in 1969 ( after the Tet offensive in South Vietnam ), in 1979 (when China ‘punished’ Vietnam for ‘invading’ Cambodia), in 1989 ( when Vietnam withdrew ), in 1999 (when PM Hun Sen narrowly escaped assassination), in 2009 (when Cambodia’s economy reeled under the Global Financial Crisis) and what Cambodia is today.

Although the UN-sponsored elections in 1993 was an important milestone on Cambodia’ s road to democracy, the various factions continued to fight one another.

It was the Win-Win amnesty proposed by PM Hun Sen, in furtherance of which he restrained himself from acting against those who wanted him killed, that finally ended the civil war in 1999 and made possible the country’s subsequent peace and development.

What Cambodia has accomplished in the last twenty years after decades of war is, by any yardstick, astonishing. Friends of Cambodia should however remember that the country is still a fragile work in process.

We should help the country make progress in the right direction, not make progress harder. From the western perspective, many countries in ASEAN do not measure up to its high standards (which were not achieved overnight) but it would be wrong therefore to weaken these countries. Indeed it is overwhelmingly in western interest to support an ASEAN which is non-aligned, friendly and economically vibrant.

Mr. George Yeo was Singapore Minister for Trade and Industry, 1999 – 2004, Minister for Foreign Affairs, 2004 – 2011. He is now active in the corporate world and has a deep unbiased understanding of Cambodia.

This article by the former Singapore foreign minister first appeared on Khmer Times on October 23, 2019.