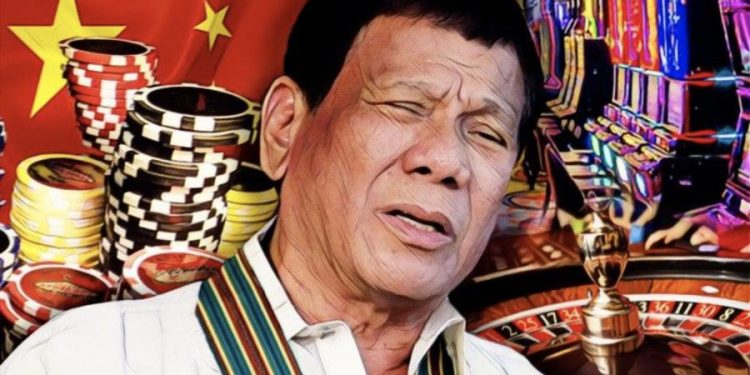 Online gambling is big business in Asia, and China wants to stop it.

Cambodia seems to be playing ball with Chinese President Xi Jinping, but the Philippines, the region’s most developed cross-border gaming center, has resisted China’s call to shut it down.

In fact, the crackdown in Cambodia is likely benefiting Philippine businesses and fattening Philippine state coffers, adding another layer to the archipelago’s complicated relationship with Beijing.

“Those operations contributed nearly US$150 million in taxes and fees last year. POGOs also rent sizable amounts of commercial office space in Manila, and a sudden closure of operations would have a deleterious effect on the commercial real estate sector.”

Property shares tumbled on the Manila stock exchange in August when Pagcor declared a moratorium on POGO applications, but industry participants report an influx of workers from Cambodian, buoying rents and industry revenue.

Online gambling describes a range of products, the most popular in Asia being live casino games streamed via internet. Other products include online versions of gaming machines and interactive games such as poker.

Sports betting is generally licensed separately, though it’s mainly conducted online, as well as in person and by phone. Experts estimate online gambling revenue in Asia exceeds the $50 billion take for the region’s brick and mortar casinos.

In the Philippines, live games stream from studios, with dozens of female dealers playing baccarat, roulette or other casino favorites at otherwise empty tables, perhaps with TV news showing in the background to prove the action is live.

Operators may offer universally legal “social gaming” without funds changing hands to get players started, then up-sell them into real money games.

Land-based casinos in the Philippines also can conduct proxy betting, usually in cooperation with junket promoters, streaming table action to a high roller who advises an agent present in the casino to place bets on their behalf.

First Cayagan expanded as fast as technology allowed, from sports betting by phone to full-fledged live streamed casino games earlier this decade. The sparsely populated province in the northeast corner of Luzon, about 550 kilometers (330 miles) from Manila, lagged in telecommunications power for live dealer online (LDO) operations, a situation it continuously bids to addresses. It also lacked a sufficient supply of competent dealers.

So First Cagayan licensees migrated outside the economic zone to Metro Manila, with live dealer studios and support services clustering in Makati.

When anti-gambling President Rodrigo Duterte took office in mid-2016, First Cagayan’s move out of its assigned territory gave Duterte a reason to knock it out of online gaming.

But few expected that he would use that opening to move oversight of the sector to Pagcor, the government owned gaming regulator that also operates its own casinos. The takeover, started in September 2016, has coincided with a rapid expansion of the sector.

The idea that there are about 60 POGOs – there were 58 licensees and three pending applicants when Pagcor declared its moratorium – is misleading because each POGO can have dozens of “service providers” operating under its license, all independently offering games to players.

The service provider model arose partly due to Pagcor steeply increasing its fees, quadrupling them in some cases. Application and initial licensing for an online casino requires an outlay of $650,000, plus $270,000 to include sports betting.

Pagcor also collects a 2% fee on POGOs’ gross gaming revenue – the difference between bets and payouts, commonly known as GGR – with a monthly minimum charge of $150,000 for online casinos and 40,000 for sports betting.

Based on those fees, authorities expect a POGO casino to generate GGR of $7.5 million a month, or $90 million a year, to cover the monthly fee. That’s incentive to minimize the risk of a margin-eroding shortfall by using multiple service providers.

Based on the fees, Pagcor pegs the minimum GGR for current POGOs at more than $5 billion, at least 25% more than GGR for the nation’s land-based casinos last year.

No wonder POGOs attract attention. With tens of thousands of Chinese nationals working in POGOs, Manila residents have complained about rising property prices and multiplying enterprises catering to Chinese that make some Filipinos feel like outsiders in their own country.

Security officials, meanwhile, have openly worried about potential POGO-related Chinese espionage; the Philippines and China have ongoing disputes over islands in the South China Sea and economic issues.

In August, a Pagcor official raised the possibility of housing Chinese POGO workers in specialized hubs. The Chinese embassy in Manila responded with an August 8 statement voicing “grave concern” over any plan to isolate Chinese workers.

In addition to trying to staunch the flow of funds out of China through illegal channels, some believe China’s leader opposes gambling as antithetical to Communist ideology.

When Presidents Xi and Duterte met in Beijing in late August, they discussed online gambling. A Duterte spokesperson told reporters the president “would most likely” study a cross-border gaming ban.

Since then, Pagcor and other government agencies have stepped up raids on illegal operators and tax or fee delinquents, but an outright ban seems unlikely given POGOs’ importance to government and property revenues.

“Duterte made a smart decision not to comply with China’s request. The real estate impact would be great. It’s too strong of an industry to disturb,” FootballBet.com chairman and CEO David Leppo says.

He envisions that in five or ten or 15 years, instead of Chinese authorities seeking to ban cross-border gambling, “they may take a hand in regulating it. Are they going to try to stop human nature?” he asks.

“It has to change sooner or later. There’s too much to lose if they don’t.”

This article was first published in Asia Times. All contents and images are copyright to their respective owners and sources.