What Happens After a Cambodia Opposition Party Comeback?

A look at a range of scenarios that could follow a significant potential development. 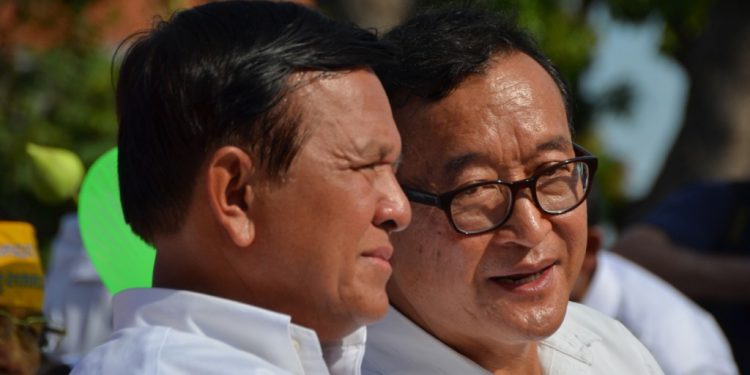 We have been promised that, on November 9, Sam Rainsy and the other exiled, senior leaders of the Cambodia National Rescue Party (CNRP) – the main opposition party that was forcibly dissolved in late 2017 – will make a climatic return to Cambodia.

On October 22, Sam Rainsy, the party’s acting-president, again appealed to Cambodians living in Thailand to join him in a non-violent march across the border, which, he hopes, will force Prime Minister Hun Sen either back to the negotiating table or to step down. And their heroic return will see the liberation of Kem Sokha, the party’s president, who has been detained on treason charges since September 2017, he reckons.

But things haven’t started too well. Mu Sochua, a CNRP deputy president, was turned away from entering Thailand in late October. Bangkok was clearly trying to avoid an international censure; by turning Mu Sochua away, it didn’t have to face of the question of whether it would arrest her on behalf of the Cambodian government.

Bangkok is likely to do the same if Sam Rainsy tries to fly in. As of October 26, Rainsy was still in Europe, meeting with the EU’s Alliance of Liberals and Democrats for Europe in Greece. There are suggestions that some European MEPs and even American officials will take part in the march. Meanwhile, the Cambodian authorities have stepped up their training on “maintaining security, order, and peace” along the Thai and Vietnamese borders. Hun Sen has vowed he won’t allow any march across the border and that his authorities will immediately arrest the CNRP leaders, most of whom have numerous politically motivated convictions to their name.

The best outcome for everyone involved (except Hun Sen) would be negotiations. A Bangkok Post editorial, dated October 26, advises: “Hun Sen must compromise.” But is it possible? If Hun Sen agrees to sit down with Sam Rainsy and co. and work out some sort of deal for their re-entrance into politics, it would reflect very badly on himself. For more than two years, he has called them traitors and threats to Cambodian peace. He had said he would never negotiate with them. He has insinuated to the Cambodian people that the economy might dip, but that is the price to pay for defeating traitors.

What, then, if he turns around and suddenly says it is okay to parley with such people? It would either demonstrate that he is willing to negotiate with people he thinks to be national enemies, or that he was lying all the time and they weren’t traitors and coup plotters – and, by definition, the crisis of the past two years needless. Either way, it doesn’t reflect well on Hun Sen. Moreover, it would put a spanner in the works of his planned dynastic succession; he is widely speculated to be planning to hand power down to one of his son’s, likely military chief Hun Manet.

But negotiation makes sense for the ruling Cambodian People’s Party (CPP). The CNRP considers the 2018 general election – which saw the CPP win all 125 seats in the National Assembly – to be invalid, so they will want to see the return of their 55 MPs to parliament, as well as the restoration of their locally-elected officials. That isn’t a major problem for the ruling party. The CNRP’s 55 MP are too few to influence National Assembly decision-making. And the government controls the purse-strings of devolved government, so it can make the job of any restored CNRP commune chief impossible. The CNRP will demand a redo of the 2018 ballot but that is a red line nobody in the CPP will cross.

Yet even a limited deal will give the ruling party three years of breathing space and international stability before having to think again about what to do with the CNRP. Indeed, the next general election won’t be until 2023. If a deal is negotiated, it will also leave the CNRP in a sort of limbo for the next few years – without any real power but always aware that the events of 2017 could so easily happen again if the ruling party sniffs potential defeat. In other words, it is in the interests of the CPP to negotiate, but less in Hun Sen’s personal interest. The CNRP, no doubt, knows that it promised beau geste will sow even more dissent within the CPP if Hun Sen is seen as putting his own interests ahead of the party’s.

Equally important is how the United States, European Union (EU), and China respond to each of these possibilities. The United States and EU would have to take a much firmer line if Sam Rainsy or any other CNRP leader is attacked. Targeted sanctions would immediately be applied on all senior Cambodian officials and their families, while the die would be cast on the EU removing Cambodia from its Everything But Arms (EBA) scheme – a decision over which will be made early next year. Washington would also likely move to remove Cambodia from its own preferential GSP scheme. Less clear is whether China, now Cambodia’s closest ally, would come to Phnom Penh’s defense over such a blatant violation? But, in all likelihood, Beijing would remain silent and supportive.

What happens if Sam Rainsy and the other CNRP leaders are arrested? It doesn’t significantly alter the demands the EU and United States have been consistent in making since late 2017 – release Kem Sokha, reinstate the CNRP, and introduce more rights reforms. Only, a host of new names would be added to the list. Nonetheless, detention of the opposition figures would strongly push the United States and EU towards more economic sanctions. In this scenario, Beijing will likely step in and make more guarantees of financial aid and loans to Cambodia, which will find itself even more of a proxy in the “new Cold War” contest between the United States and China.

Fathoming the international community’s response to what, I reckon, is the second most probable eventuality – Sam Rainsy and co. fail to return – is the most difficult. The U.S. and EU’s position has long been that everything will be fine if political conditions simply return to how they were in early 2017 – indeed, their demands for Kem Sokha’s release and the CNRP reinstatement are simply restorative. But if the CNRP fails to return on November 9, after many previous promises to return, the public will certainly lose faith in the party. And if the CNRP can no longer garner widespread support, will the West reconsider their demands? Why focus so much on the CNRP’s reinstatement if it is no longer popular or self-confident? This would greatly improve Phnom Penh’s bargaining hand, and possibly soften Washington and Brussels’ demands. Whatever happens on November 9, it will at least be headway in a political impasse that is now entering its third year.