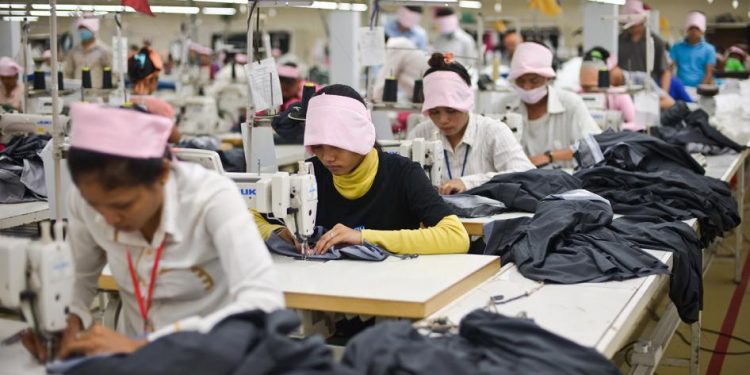 The European Union and Cambodia moved closer to a confrontation that may be a litmus test for whether EU free trade helps promote free societies.

The European Commission today sent the Cambodian government a report on alleged human-rights violations. The submission is part of an EU threat to suspend Cambodia’s right to export all goods except weapons duty-free and quota-free to the bloc, the world’s biggest single market.

“We are very concerned about the human-rights situation there,” EU Trade Commissioner Cecilia Malmstrom said on Twitter.

The commission is due to decide in February whether to revoke — at least in part — the trade preferences, which are key for a Cambodian garment industry that employs three-quarters of a million people. Cambodia has a month to respond to Tuesday’s report by the commission, the 28-nation EU’s executive arm in Brussels.

At issue is whether the EU can use the prospect of economic sanctions to prod changes in the behavior of Cambodian Prime Minister Hun Sen, who extended more than three decades of rule last year when his party won a boycotted election.

Since then, Hun Sen has struck a defiant tone, courted several Eastern European countries for support and vowed to turn to China for help should Cambodia lose its European trade benefits. At home, he released opposition leader Kem Sokha from house arrest after two years even while promising to “use weapons of all kinds” to prevent dissidents in self-imposed exile from returning to the country.

The EU has been sending steady, tough signals for more than a year about the possibility of removing the trade benefits for Cambodia while making clear that the bloc would refrain from doing so should the Cambodian government take concrete steps to address Europe’s concerns. EU imports from Cambodia last year were worth 5.3 billion euros ($5.8 billion), with clothing and textiles accounting for around three-quarters of the total, according to the commission.

The two sides are also fighting over a narrower trade issue that has nothing to do with fundamental rights: EU tariffs on Cambodian rice introduced in January after Italy requested special protection for domestic producers.

This article was first published in Bloomberg. All contents and images are copyright to their respective owners and sources.