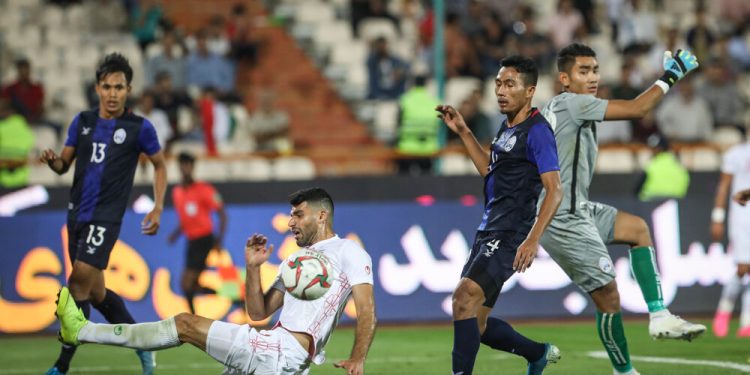 Vietnam, Singapore, Indonesia and Cambodia all featured on both match days, while Thailand, Malaysia and Myanmar played just the one qualifier for this international break.

Here, FOX Sports Asia assesses how well each ASEAN team did in the recent FIFA World Cup second-round Asian qualifiers, as well as picks out the star pupil who performed the best.

Philippines had to bide their time as they were not in action on Match Day 3 and, when they finally took to the field on Tuesday, it was no walk in the Panaad Park and Stadium as they came up against one of Asia’s heavyweights in China PR.

Having fallen to a 3-0 defeat when they met at AFC Asian Cup 2019, the Azkals showed how far they have come with a battling display that ultimately earned them a point from a 0-0 draw, which currently sees them lie third in Group A.

Philippines have also shown an ability to perform in different systems depending on how strong their opponents are, and they should be aiming for a big win against Maldives on November 14 as the second round of qualifiers reaches its halfway stage.

Star pupil: Alvaro Silva – Philippines goalkeeper Neil Etheridge produced a series of fine stops to deny China, including a fine stop in the closing stages of the match but, throughout the 90 minutes, Silva deserves plenty of credit for the way he organised the defence but also won his one-on-one duels. Coming up against the physically-imposing Yang Xu – who had scored five goals in his previous two international outings – is no easy task but Silva nullified his threat to the point that the target man was hauled off in the 77th minute.

It was never going to be easy for Cambodia coming up against two powerhouses in Iran and Iraq, but even they would feel they could have done better than conceding 18 goals over the past week.

The 14-0 loss to Team Melli in Tehran seemed like a nightmare that they just could not wake up from, although they did restore some pride with a spirited display at home despite losing 4-0 to Iraq.

Keisuke Honda has previously stated that Cambodia cannot always look to park the bus if they are to improve in the long run, but perhaps they can find a balance that does not see them on the receiving end of embarassing and morale-shattering losses.

Star pupil: Kouch Sokumpheak – For all the young stars that have come through the ranks in recent years, the evergreen Kouch Sokumpheak continues to retain his place in the side 13 years on from his first cap. A steadying influence in the engine room, the 32-year-old did his best to get Cambodia going – especially in the first half against Iraq.

After picking up four points in their opening two matches, Singapore fell to 3-0 and 3-1 defeats over the past week but it was always going to take something special to avoid that against Saudi Arabia and Uzbekistan respectively.

On both occasions, their opponents found them extremely tough to break down and they even gave the Uzbeks something to think about when Ikhsan Fandi equalised to make it 1-1 on Tuesday.

Progressing to the next round may have seemed unlikely when the draw was first made but the Lions are looking rejuvenated under Tatsuma Yoshida and, with just two points separating the top four teams, hope springs eternal for now.

Star pupil: Izwan Mahbud – Singapore are blessed with two excellent goalkeepers and it is Izwan that is currently preferred to by Yoshida, who has had his faith fully repaid. The Nongbua Pitchaya was outstanding against Saudi Arabia and kept the scoreline respectable, and he could hardly be faulted for any of the goals he let in against Uzbekistan.

Having narrowly lost 2-0 to Japan in their last qualifier, Myanmar must have been optimistic in their chances of a positive result against Kyrgyz Republic.

Instead, shambolic defending saw them concede twice inside the opening nine minutes and they were 5-0 down at halftime before ultimately succumbing to a 7-0 defeat.

There were barely any positives for coach Miodrag Radulovic to take away from the display as they find themselves languishing at the bottom of Group F following three straight losses.

Star pupil: Hlaing Bo Bo – With insipid individual displays littered all over the park, it was left to Hlaing Bo Bo to offer any sort of consolation to Myanmar. As always, he never stopped trying and offered some drive in the engine room but he just did not have enough of a supporting cast.

After losing to Malaysia and Thailand last month, it did not seem like Indonesia could get any worse – until they lost 5-0 and 3-1 to United Arab Emirates and Vietnam in the most recent round of qualifiers.

A defeat was always on the cards playing away to UAE but it was the manner in which they offered no resistance that would have disappointed their passionate fans the most, while Vietnam were also barely troubled even though they let Garuda grab a late consolation through an Irfan Bachdim effort.

With no points from four matches in Group G, Indonesia’s hopes of progress are effectively extinguished as the pressure mounts on coach Simon McMenemy with each passing day.

Star pupil: Evan Dimas – Like Myanmar, there were not too many Indonesia players that can come out of the recent international break with their heads held high. Having been dropped for the UAE tie, Evan was restored to the starting XI and at least brought some rhythm and composure to the Indonesia midfield.

With Malaysia only in action on Match Day 3, their grade was always going to be determined by how well they fared against Vietnam last Thursday.

While a 1-0 defeat was not the most ideal result, it still was not the worst display away to the dominant force of Southeast Asia in front of over 38,000 at the My Dinh National Stadium.

In a feisty encounter, Harimau Malaya more than matched the hosts and were only undone by a solitary piece of magic by Que Ngoc Hai and Nguyen Quang Hai in the first half.

Star pupil: Brendan Gan – Considering his first appearance for Malaysia was over three years ago, Brendan Gan probably would have been hoping to have more than the 12 caps to his name but injuries have not been key to him. Nonetheless, he looks back to his best in 2019 and his all-action display against the Vietnamese reiterates how much he has to offer.

After three matches, Thailand remain unbeaten in Group G and they extended their streak in some style by claiming a 2-1 win over United Arab Emirates, who only back in January reached the semi-finals of the AFC Asian Cup.

The win was all the more impressive considering they were without influential trio Chanathip Songkrasin, Thitipan Puangchan and Tristan Do but, in their absence, others like Phitiwat Sukjitthammakul and Nitipong Selanon rose to the occasion.

Thailand coach Akira Nishino will also be delighted that veteran striker Teerasil Dangda scored on his return from injury, as his players proved to be too good for UAE.

Star pupil: Ekanit Panya – Until Suphanat Mueanta broke the record last year, Ekanit Panya held the status of being the youngest player ever to score in Thai League 1. Still only 19, the Chiangrai United starlet recently broke into the senior national team and took his chance with both hands on Tuesday with a goal and assist against the Emirati.

Over the past 12 months, Vietnam have shown they can cause a upset against the continent’s big boys but – as an emerging force – the onus is also now on them to ensure they are not upset in ties where they are the favourites.

And they did just that as by toiling to a 1-0 triumph over Malaysia last Thursday, before cruising to a 3-1 win over Indonesia in what could have been a tricky encounter at the Kapten I Wayan Dipta Stadium in Bali.

Vietnam coach Park Hang-seo genuinely seems to have largely settled on his starting XI but is never afraid to throw others into the mix, with the likes of Nguyen Tien Linh and Pham Duc Huy shining after being handed opportunities.

Star pupil: Que Ngoc Hai – As always, Nguyen Quang Hai was a standout performer for Vietnam in both games but centre-back Que Ngoc Hai is growing in influence with every game, and not just with regards to his leadership while wearing the captain’s armband. With the younger Do Duy Manh and Bui Tien Dung deployed on either side of him, Ngoc Hai has taken it upon himself to initiate proceedings from the back and his superb diagonal ball to assist Quang Hai against Malaysia was a hallmark of a ball-playing defender.