Sihanoukville: the sleepy beach town in Cambodia that bet its future on Chinese money 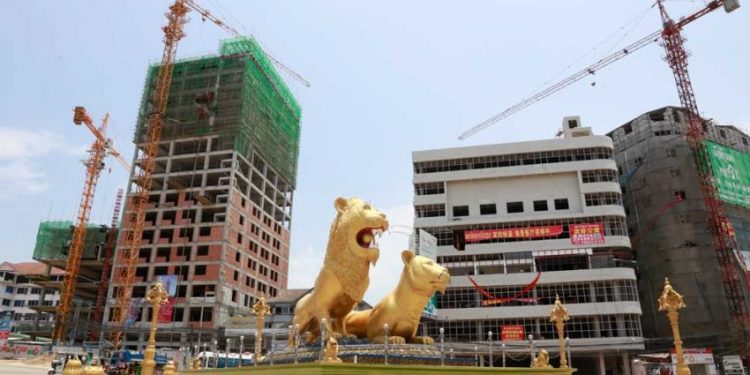 Sihanoukville may be more than 3,500km away from Beijing, but it feels more like a Chinese city than a sleepy beach town in Cambodia.

Everywhere, people can be heard speaking in Mandarin. Chinese restaurants have sprung up on dusty roads where huge construction sites – including many hotels and more than 80 casinos – now dominate the skyline.

This former fishing village in the country’s southwest used to be a favourite of backpackers. Now it is booming, and much of the development is being driven by Chinese money.

Sihanoukville is named for the country’s late king Norodom Sihanouk, who was on good terms with China’s former chairman, Mao Zedong, and died in the Chinese capital in 2012 – a year before Beijing unveiled its controversial Belt and Road Initiative. The global infrastructure and investment scheme has brought dramatic change to Sihanoukville, turning it into what locals call “a Mao Zedong city”.

Chinese began flocking there about three years ago, thanks to relaxed immigration rules as the government sought more foreign investment, especially from China. The community has now grown to an estimated 80,000 – about equal to the number of Cambodians living in the city, according to Sihanoukville mayor Y Sokleng.

Now, almost 90 per cent of businesses in the city, from the hotels and casinos to restaurants and massage parlours, are run by Chinese, provincial police chief Chuon Narin said.

But while the boom has created opportunities, it has also brought serious problems for Sihanoukville.

Authorities say illegal gambling, prostitution and drug trafficking are rife, while a deadly building collapse prompted a backlash over the quality and safety of Chinese construction work. Rising rents are meanwhile pushing the poorest out of the city.

In June, after a Chinese-owned seven-storey building collapsed on top of construction workers as they slept, killing 28 Cambodians, governor Yun Min resigned and a sweeping inspection was carried out across the city. Work was halted at 22 unlicensed construction sites – about 10 per cent of the city’s projects, most of them owned by Chinese. Demolition orders were given for two new Chinese-owned buildings after huge cracks appeared and they were found to be sinking following heavy downpours.

“The unscrupulous practices by the Chinese – such as using substandard building materials like sea sand in the cement, hence compromising the safety of the buildings – has infuriated the local people,” he said.

The construction boom has also led to serious environmental degradation, according to Alex Gonzalez-Davidson, an activist from Mother Nature Cambodia.

He said the issue was exacerbated by the city’s “woefully inadequate public services” such as electricity, water supply, waste and sewage disposal. “There is also a growing garbage crisis, which is left out in the open for days or weeks until it is collected, and then sent to a field in the city’s outskirts, where it is simply burnt or left to rot,” he said.

Crime is also on the rise – there was a 25 per cent increase in criminal cases in the province last year from 2017, according to police.

In July, a 25-year-old Chinese woman who worked at a casino was shot dead in the street late at night.

Police are still looking for three Chinese suspects. It came after a Chinese man was gunned down in broad daylight in May. Two Chinese nationals have been arrested over his murder.

The shootings prompted China’s foreign ministry to issue a travel advisory on August 3 urging Chinese travellers to exercise care when they visited Sihanoukville. China is Cambodia’s top tourism market and growing, with about 1.9 million Chinese visiting the country last year, up from 1.2 million in 2017, according to the tourism ministry.

In a case in July, Sihanoukville police arrested 146 people, mostly Chinese, suspected of drug use and trafficking in an early morning raid on a Chinese-owned nightclub in the city, seizing 44 grams of Ketamine and 54 grams of ecstasy.

More than 500 Chinese nationals have been arrested in the city and deported since the middle of July, most of them found to be involved in online scams, according to local media.

“Back in the Chinese mainland, the local authorities have a stronger capacity and capability to enforce law and order,” he said. “But the small group of Chinese who have come to Sihanoukville are not investors.

They’ve come here to take advantage of the weak capacity and capability [in law enforcement] … That is the problem now.”

‘Something is not right’

The staggering number of casinos that have been built in the city – 48 of them run by Chinese and all catering to foreigners, since it is illegal for Cambodians to gamble – are seen as a big part of the social problems.

In February, global watchdog the Financial Action Task Force put Cambodia on a watch list after identifying “strategic deficiencies” in its ability to combat money laundering and terrorism financing.

“Sihanoukville could become a major hub for the laundering of dirty money from China, mainly through the totally unregulated gambling and property sectors,” Gonzalez-Davidson said.

“The government boasted recently that the city now had 88 casinos, up from not even five in less than four years. Clearly something is not right there.”

Chinese gang threatens chaos in Cambodian province as rift deepens between locals and new arrivals
Manufacturers meanwhile complain that they are losing workers to the casinos.

Kong Linghu’s car parts factory is one of more than 160 located in a Chinese-run special economic zone that was set up under the belt and road plan. More than 30,000 Cambodians work at factories there, but Kong said it was getting harder to find staff.

“The casinos are appealing places for young locals to work instead of in the factories, because the working environment is better, they can earn more and go to work in a suit,” Kong said.

“It’s comfortable for people looking for jobs … most [casino] jobs, the employees are only required to know how to work as dealers and how to use the computer because those businesses are related to gambling,” she said. “However … the Cambodian poor people who were able to make small businesses, they presently cannot continue their business since [rents are] very high.”

But mayor Y Sokleng defended the casinos, saying locals were not allowed to gamble and that Chinese and their investments were generally welcomed.

“Sihanoukville is an important stop for China’s Belt and Road Initiative. We [function as a] bridge between China and other Southeast Asian cities,” he said.

China is the biggest investor in Cambodia, accounting for 30 per cent of the US$3.6 billion of foreign investment in 2016, according to the Council for Development of Cambodia.

Some locals have embraced the influx of Chinese money.

Tem Ban, a 33-year-old tuk-tuk driver from a rural village near Phnom Penh, said he liked the new high-rises in Sihanoukville and hoped more Chinese investors would come to the city.

“I can earn on average US$30 a day and give my family about US$500 a month. I came here because I can make money – and I want to earn more,” said Tem Ban, who sleeps in his tuk-tuk every night to save cash.

Property agent Sorn Lidy, 25, who works for a Chinese developer, was also happy to be making money from the boom, saying she could earn US$1,000 a month with extra work as an interpreter for businesspeople from China.

Bou Saroeun, who sells snacks and everyday items near a Buddhist temple, said he had rented his house to Chinese tenants for US$2,000 a month. “My shop now has good profits with more Chinese tourists,” the 50-year-old said. “I tell my five children that they have to learn Chinese well because that will give them a better future.”

Some Cambodian teenagers have also improved their job prospects with free vocational training at the Cambodia-China Friendship Polytechnic Institute, which is also in the special economic zone and was built with Chinese funding. Chorn Malai, 19, studies accounting at the institute and said she was grateful for the chance to study. “I hope I can find a job as an accountant in my hometown Krong Kampot after I complete my course,” she said.

But not everyone has benefited from the boom.

Maggie Eno, coordinator and founding member of M’Lop Tapang, a child protection charity in the city, said it had taken a heavy toll on poor children and families, especially in the past 18 months.

“The low-income families can no longer live in their hometown because the rent has become too high. They live outside the city in a very terrible, broken shabby place. They cannot get into the city because of the terrible traffic. Even if they live outside the city, they need to pay US$200 [in rent] a month … three years ago, they paid only US$30 a month,” Eno said.

“When the officials talk about development, they only think about big buildings and businesses but they are not thinking about people. Such development is doomed to fail because the poor people are being neglected,” she said. “The development has gone the wrong way. And the catalyst for this change is the coming of the Chinese investment.”

Academic Neak Chandarith agreed that the city’s poorest were being forced to leave their homes and said Chinese companies should work with the local authorities to take responsibility for the situation.

“I think these problems are common when a place is developing too fast, when there is limited local capacity to absorb the rapid influx of Chinese investment,” he said.

But rising rents are not only making locals’ lives harder – some Chinese investors have also questioned whether Sihanoukville is such a good place to do business.

One businessman who opened a Shaxian eatery specialising in Fujian food in the city centre last year said he was struggling. “I haven’t made any profit because of the high costs here,” said the businessman, surnamed Kong. “The monthly rent of my small shop is about US$5,000 and I don’t know how long I can continue.”

The restaurant is less than 15 square metres and charges about US$5 for a bowl of noodles.

For Jia Jianmin, Sihanoukville is a better bet than China, where his four restaurants are not doing well amid the economic slowdown. He said his new place at the popular Ou Chheuteal Beach had better prospects. “I invested about US$285,000 in the restaurant and I have confidence in Sihanoukville,” Jia said. “The labour costs here are pretty low and there is huge potential.”

Freshwater dolphins in the Mekong are benefiting from better protection