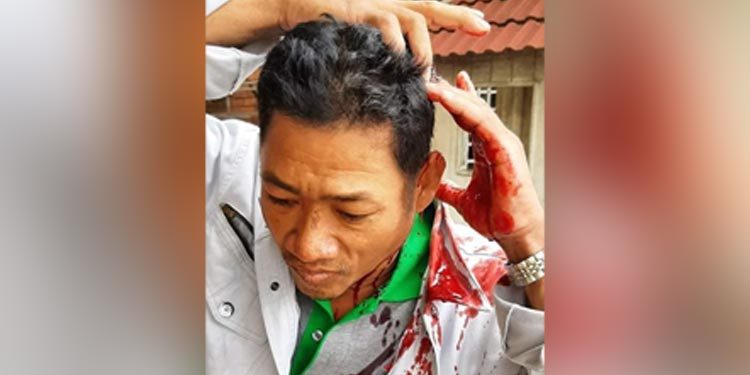 Municipal police are looking for suspects following a complaint by a former bodyguard of ex-CNRP leader Sam Rainsy that he was assaulted by two people in Meanchey district yesterday.

In video posted on Facebook, Pouk Chenda yesterday said two strangers on a motorbike had followed him while he was walking back from a market in Chak Angre Krom commune.

“They approached me at about 10am and I was hit on the back of my head with a metal rod while walking,” he said. “When I touched my head it was bleeding and the two men drove off.”

Captain Vuth Savoan, commune police chief, yesterday said that police are working on the case after receiving the complaint in the afternoon.

“Mr Chenda said that two unknown people hit him on the back of the head with an iron bar,” he noted. “He has filed a complaint with our commune police post to take action against the suspects for intentional violence.”

Mr Chenda could not be reached for comment yesterday. However, former CNRP lawmaker Ou Chanrath, expressed concern over the incident.

“I don’t care if the assault is politically motivated or because of personal issues, but police should take action and arrest the suspects because we have seen many similar cases happening to former CNRP officials,” he said. “We do not support any use of violence in the Kingdom.”

Last week, dozens of former activists and members of the dissolved opposition party were arrested over their alleged involvement in an overseas plot to cause public disorder in conjunction with a planned return to the Kingdom by Mr Rainsy.