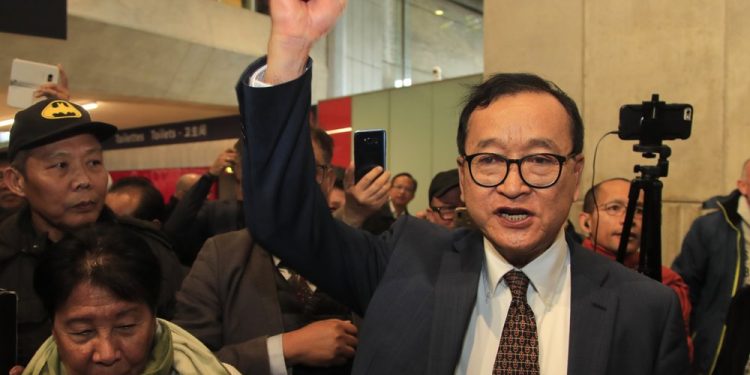 PARIS (AP) — Cambodia’s most prominent opposition leader, Sam Rainsy, was stopped from boarding a flight in Paris on Thursday in his attempt to return home to challenge his country’s longtime autocratic leader, but he assured his followers he will go ahead with his plan.

He and fellow leaders of the banned Cambodia National Rescue Party had vowed to enter Cambodia from Thailand on Saturday to spark a popular movement to oust Prime Minister Hun Sen from power.

When Sam Rainsy tried to take a Thai Airways flight to Bangkok from Paris, where he lives in exile, Thailand’s flag carrier told him “they had received from very high up the instruction to not allow me to board,” he said.

Thai Prime Minister Prayuth Chan-ocha said Wednesday that Sam Rainsy would not be allowed to enter Thailand because members of the Association of Southeast Asian Nations — like Thailand and Cambodia — have a policy of not interfering in the affairs of neighboring countries.

Hun Sen had declared that Sam Rainsy and his colleagues would be blocked from entering Cambodia and had informed neighboring countries that they were unwelcome.

At Charles de Gaulle Airport outside Paris, an angry Sam Rainsy told reporters that he wouldn’t be cowed by being kept off his flight and said he plans to return via another neighboring country.

“Never, never will I abandon. We need to continue, the days of Hun Sen are numbered. Democracy will be reinstalled in the near future. It’s our conviction and our determination,” he said.

Before heading to the airport, Sam Rainsy told The Associated Press that Hun Sen is going all out to block their return because he is “very afraid.”

He later made an online broadcast on Facebook, where he has almost 4.8 million followers, calling on his compatriots not to be disappointed and remain strong.

“We will be seeking all the possibilities, all the options, in order to make sure that we are finally able to arrive in Cambodia to push for the regime change plan that our Cambodians are hungry to see,” he said.

Many human rights activists criticized ASEAN countries for attempting to block Sam Rainsy and his colleagues.

“What we are seeing now shows that the long arm of Hun Sen’s repression is reaching all over Southeast Asia. Members of ASEAN states are now collaborating with Hun Sen in making sure that there is no space for the opposition party and their network to launch any campaign to challenge Hun Sen,” said Sunai Phasuk, a senior researcher based in Thailand for the group Human Rights Watch.

Malaysia released Mu Sochua and the two other activists on Thursday even though Prime Minister Mahathir Mohamad had earlier said Malaysia doesn’t want to be used as a base for political activists or interfere in the affairs of other countries.

Mu Sochua said after her release that the Malaysian government demonstrated that it abides by its own laws and makes its own decisions.

“There is hope . there is no way my spirit can be impacted by such a detention,” she told The Associated Press. “We have been struggling for democracy for the past 25 years, and I’ve also been in prison, in the prison of Mr. Hun Sen.”

Nicholas Bequelin, Amnesty International’s East and South East Asia regional director, said Malaysian authorities “have ultimately done the right thing – but the three should never have been detained in the first place. Other ASEAN states must follow suit and refuse to collude in Cambodia’s human rights abuses.”

Cambodian officials have repeatedly warned that if the opposition leaders make it back, they will be immediately arrested. Most if not all have convictions or charges pending against them in Cambodian courts, including inciting armed rebellion, despite their avowedly nonviolent intentions.

Cambodian courts are widely considered to be under the influence of the government, which employs the law to harass its opponents.